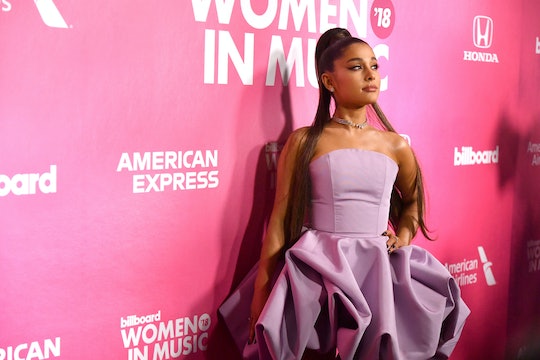 Ariana Grande Gets Real About Depression & Fans Will Totally Relate

Celebrities don't always keep an open dialogue with their fans, especially when it comes to the less glamorous things in their lives, but when they do people rally around them. Ariana Grande got real about depression after tweeting that she feels "empty," and Arianators of all ages are showering her in love and support. The "Thank U, Next" singer is known for having an open dialogue with her fans, especially after losing ex-boyfriend Mac Miller in September.

On Saturday, Grande posted an Instagram Story of a Jim Carrey quote about depression that resonated with her, according to Entertainment Tonight. In the post, Carrey is quoted as saying, "Depression is your body saying, 'I don't want to be this character anymore. I don't want to hold up this avatar that you've created in the world. It's too much for me.'" He added in the quote featured in Grande's Instagram Story post that depression is akin to a "'deep rest,'" saying the body "needs to be depressed" from time to time. As Carry said in the message, your body "needs rest from this character that you've been trying to play." Grande called Carrey the "LOML [love of my life] forever," admitting that her first screen name on AOL Instant Messenger when she "was in like 4th grade" was jimcarreyfan42, Entertainment Tonight reported.

The post came a few days after Grande opened up about how hard it can be to be on the road for long periods of time. Per a report from In Touch Weekly, Grande tweeted at a fan that writing music "is healing," but actually singing the songs can be a challenge. "Performing it is like reliving it all over again and it is hell," she said in her Twitter message, according to the magazine. Her response led to an outpouring of love from fans urging her to "make time for herself," In Touch Weekly reported. Grande said that she wouldn't be canceling the remainder of her Sweetener tour, but noted that she was feeling "confused and tired."

"I don't think it is [healthy]. It's been v hard. I have sm [so much] on my mind and it's so heavy and no energy to process or work thru any of it but I'm trying hard. And I have the twins. And seeing you all is so nice. But it's hard emotionally. I wish it were a year ago. I'd give anything," Grande said on Twitter, according to In Touch.

She also confessed to feeling "empty" in another tweet to a fan, according to Entertainment Tonight. Grande said in her message, "I just feel empty and i wanna have more to say / better energy to give to u and rn i don't have anything. love u."

Mental health is something Grande hasn't shied away from talking about. In July she revealed that she was battling post-traumatic stress disorder (PTSD) and anxiety in an interview with Elle. Her problems got worse after the Manchester bombing in 2017. Grande told the outlet that she's "always had anxiety," but that after the terrorist attack at one of her concerts, she started experiencing physical signs of it. She said for several months she "felt so upside down," but she had therapy to fall back on. Grande told Elle she started therapy as a child, shortly after her parents divorced, and is still in it to this day, noting that "It's work."

"I would be in a good mood, find and happy, and then they would hit me out of nowhere. I've always had anxiety, but it had never been physical before. There were a couple of months straight where I felt so upside down," Grande said of her anxiety symptoms.

Things haven't always been easy for the Grammy Award-winning musician. In addition to the attack at her concert in 2017, she got engaged to Pete Davidson and called it off and lost Miller to an accidental overdose. Still, she is standing strong and speaking openly about her mental state. Her willingness to talk with fans about her struggles is encouraging to others in similar situations, and is a major step toward breaking the stigma that surrounds depression and mental illness.