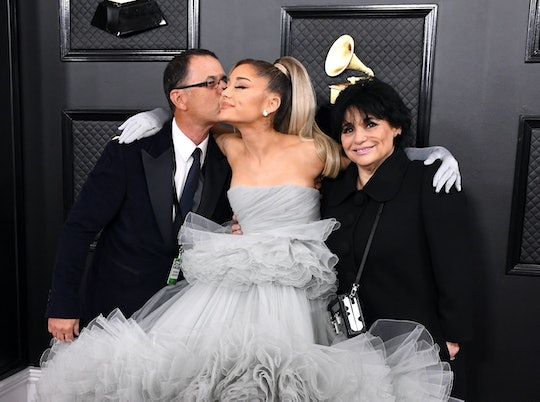 There were a lot of amazing looks at the Grammy Awards on Sunday, but I'd say that Ariana Grande, her parents, and her poofy Grammys dress certainly won the night. It didn't matter if she won or lost any of the awards that she was nominated for, because her dress and her dates were better than any kind of trophy.

Sunday was a huge night for Grande. The singer was not only nominated for five awards, including Record of the Year and Album of the Year, but was also performing at the show. Needless to say, it was a huge night for her, and it was only natural for her to have both of her parents — mom, Joan Grande and dad, Edward Butera — by her side as her support system. Grande posed with her parents on the red carpet and even stopped to compliment a little girl on her outfit all while looking like an absolute vision in her gray tulle dress.

Grande has been vocal about how much family means to her. In her hit song, "thank u, next" Grande talks about how excited she is to walk the aisle one day while holding hands with her "mama." It's safe to say that 2019 was a big year for Grande and her family. On Thanksgiving, the star shared that this year was the first time in 18 years that she had spent the holiday with both parents after her parents divorced when she was 8 years old, according to Vogue. Bringing both of them as her dates to the Grammys this year only highlights how important they are to her — and fans on Twitter recognized this big moment for her.

Once Grande was inside the Staples Center, she sat next to her parents and her longtime best friend, Doug Middlebrook. This proved that she was bringing her full support system to cheer her on during one of the biggest nights in music.

Grande has repeatedly described herself as her mom's biggest fan, often sharing memories on social media, and she explained to Vogue in July that growing up in her household was fun because of her mom (who would constantly play the best music). Of course, that would shape Grande into a Grammy-nominated artist.