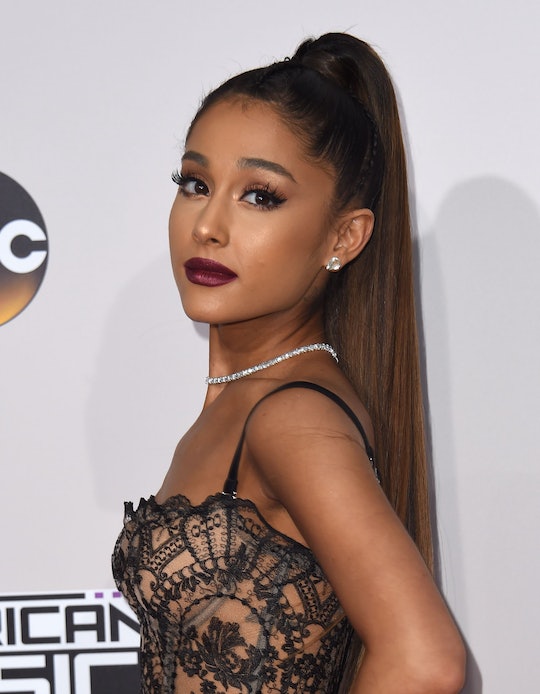 Ariana Grande Drops The Mic After Fan Demeans Her

Ariana Grande is super talented, beautiful, and famous — and certainly no stranger to having comments made about her in magazines and on social media (remember #DonutGate?). But don't think for a second she won't call you out on your misogynist nonsense. In a tweet Tuesday night, Ariana Grande made an important statement about women and objectification after a fan encounter left her feeling shaken and angry. She wrote that, while out with her boyfriend, rapper Mac Miller, the couple met "a young boy" who was a big fan of Miller's, and that she "thought all of this was cute and exciting" until he told Miller, "Ariana is sexy as hell man i see you, i see you hitting that!!!" Needless to say, Grande was not impressed, and in her tweet, she wrote, "*pause* Hitting that? the f—k??”

According to Us Weekly, the "Dangerous Woman" singer wrote that she "felt sick and objectified," and was taken aback that the male fan had no problem not only saying something like that in general, but saying it right in front of her. That, Grande argued, was a perfect example of "the kinds of moments that contribute to women's sense of fear and inadequacy," and wrote, "it hurts my heart that so many young people are so comfortable enough using these phrases and objectifying women."

As upsetting and infuriating as that encounter clearly was for Grande, it is so admirable and important that she is refusing to keep quiet about it. As she noted, the fact that those kinds of moments aren't rare or unique (not just for her, but for so many women), coupled with the fact that it happened so casually, suggests that there really are a lot of people out there who honestly wouldn't even see the problem with it (the boy in question, for example, certainly didn't seem to think there was anything wrong with what he was saying).

But Grande — along with any woman who's ever been catcalled or who has been on the receiving end of any kind of degrading comment based on her gender — knows that not only is it unfair and uncalled for, it's also really offensive and hurtful, and can also be really scary. While the fan may have thought he was being clever or cool, Grande taught him (and anyone else who may share his views) one very important lesson in her tweet: "I am not a piece of meat that a man gets to utilize for his pleasure. I'm an adult human being in a relationship with a man who treats me with love and respect." (Yaaaaaassss.)

In that sense, too, Grande is also making a statement. While it may seem to some people that Miller is lucky to be "hitting that" (which, ugh), it's clear from the way Grande and Miller talk about their relationship that neither of them would ever see it that way, and that Miller admires and respects Grande the way that all women deserve to be admired and respected by their partners. In an interview with Vogue back in September, a newly-sober Miller spoke about his relationship with Grande, and while he admitted that he's "still trying to figure out how to navigate [talking about their relationship]" publicly, Miller did discuss how happy he was to be with her, and said, “I think a lot of times people just want to be cool, and to be in love is not cool. But I think it’s the coolest. I think love is the coolest thing that there is.”

Actually, not only is Miller unafraid to seem uncool talking about how in love he is, he's also not afraid to be a rap artist putting out an entire album about love and romance — and then, on top of that, titling it The Divine Feminine. Although Miller told Billboard that he "[doesn't] know if [he's] a feminist" (a question that hopefully he's now revisiting?) he did say that he has a ton of respect for women and that they have had a big influence on his life:

...Women have always been the sturdiest people in my life and have been incredible sources of energy. I don’t know if I’m a feminist, but I just know that I am all for outspoken, powerful women. I’m blessed with them in my life. I don’t know if that makes me a feminist. A lot of this record is about the energy surrounding this planet. It’s a feminine one — Mother Earth. We need to hold that up as something sacred.

One person who certainly isn't afraid to call herself a feminist though is Grande herself, and while her latest tweet was totally on-point, it definitely isn't the first time she's made an important statement about double standards. According to Vanity Fair, last year Grande shared her thoughts about unfair commentary regarding what was then her recent breakup from Big Sean, and made it clear that she'd totally had enough. Grande wrote that she was "tired of living in a world where women are mostly referred to as a man's past, present, or future PROPERTY/POSSESSION." And, in case anyone was still struggling with that concept, she made it really, really clear: "I ... do not. belong. to anyone. but myself. and neither do you."

In the tweet, Grande explained that she comes "from a long line of female activists" and wrote that "the double standards and misogyny are still ever present. I can't wait to live in a world where people aren't valued by who they are dating."

In case anyone's wondering, I'm pretty sure that is how you issue a pretty epic feminist throwdown when far too many people seem to think they can say whatever they'd like about you and your relationship. And honestly? Something tells me that if Grande's boyfriend wasn't a proud self-proclaimed feminist before this point, he probably is now.