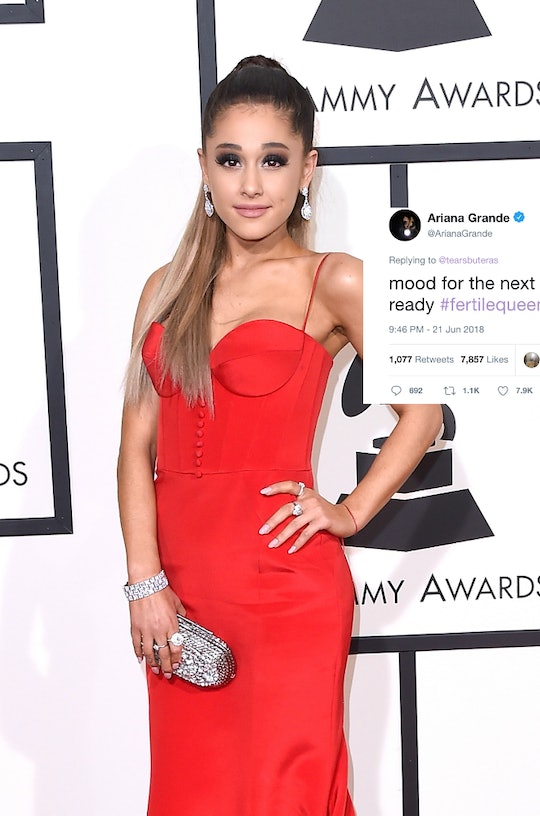 Ariana Grande's engagement to Saturday Night Live actor and comedian Pete Davidson has been a whirlwind to say the least. The couple has been super cute on social media this past month, showing just how much love they have for each other. The best thing is, they're not afraid to talk about their relationship, either — which makes it even sweeter. But based on their interactions, some people speculated that Grande and Davidson had even bigger news to tell fans than just their engagement (like in the form of a pregnancy announcement). But that isn't the case. On Thursday night, Grande shut down pregnancy rumors with one hilarious tweet that confirmed she isn't expecting a little Grande-Davidson baby any time soon.

While some people get upset about pregnancy rumors (for obvious reasons) Grande had a great reaction to the rumors about her. On Friday, a Twitter user reposted a photo of the cover of Grande's new album, Sweetener, with the eyes photoshopped to make it look like Grande was rolling them. "aRiaNA Is PreGnNant," the user wrote in the Tweet, making it seem as if Grande was mocking the rumors.

Grande agreed with the user (and the tweet), taking to Twitter to reply to the rumors and shut them down once and for all. "Mood for the next few years until I'm actually ready #fertilequeen," Grande said in the tweet. She could not have addressed the rumors any better.

Based on how many pregnancy rumors that Grande has had about her (which started, even before she was dating Davidson), they do make Grande seem like a "fertile queen." But when she is ready to have kids, rest assured that her body will be ready to get pregnant — since she is a "fertile queen" after all.

It's not as if Grande doesn't want to have kids — she does, which she confirmed in a tweet on Thursday night, according to Us Weekly. After one Twitter told Grande that she would have "the cutest babies ever" (which is the truth), Grande had to agree with them — but also let the Twitter user know that it might be a while before she makes those super cute babies. "In a while," Grande tweeted back to the fan.

Based on this tweet, it's likely that fans shouldn't expect to see a little Grande-Davidson running around in the next few years. But fans should give Grande some time to enjoy herself and her relationship (after all, she is only 24-years-old, according to Us Weekly) and then she could be having babies in no time. But that is her decision to make when she is ready to make it.

This isn't the first time that Grande has talked about pregnancy. Earlier this month, Davidson posted a photo on Instagram with the actor, Brian Tyree Henry, with the caption "I'm having his kids," according to People. But Grande hilariously responded to the Instagram post by commenting "I look good here" — which implied that Grande would be having Davidson's kids, according to People. Based on Grande's tweets on Thursday, Grande's comment on Davidson's photo was just a joke. She isn't having his babies yet.

This goes without saying but pregnancy rumors are hard for any woman to deal with, even for celebrities. They are particularly bad if that woman is trying to get pregnant and hasn't gotten pregnant or if that woman is dealing with their body image. Even if people rightfully assume a woman is pregnant, they should wait until the person confirms it themselves. Just because Grande and Davidson are engaged doesn't mean that fans should start planning the rest of her life out for her — she will do that on her own.

Rest assured that when Grande is ready to get pregnant and share it with the world, the "fertile queen" will let fans know.