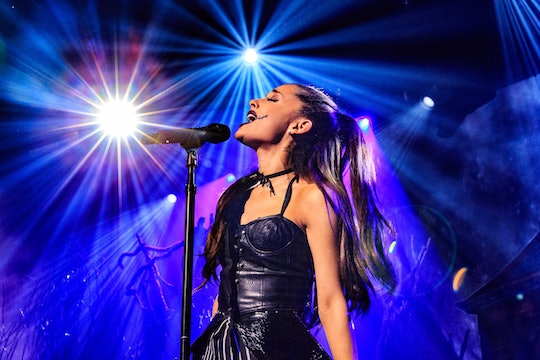 It’s hard to be 100 percent in love with yourself 100 percent of the time. Which is why it’s nice to get reminders like the body positive tweet Ariana Grande sent this morning to her followers. After someone tweeted that they’d prefer Ariel Winter to Grande because “curves are sexy and sticks aren’t,” Grande immediately responded by taking on body shamers everywhere. She’s been doing this all week, really. Just last week, she put two radio hosts in their place on the Power 106 morning show when hosts Justin Credible and Eric D-Lux asked her what she would rather never use again: Makeup or her cellphone?

In a clip from the segment, Grande can be seen giving them the most glorious, bored look. "Is this men assuming that that's what girls would have to choose between?" she says. Apparently, the boys didn’t really pick up on her anger, and continued to question her about what she would like to change in the world if she could. Her answer? Again, right on the mark: “I have a long list of things I'd like to change," she said. "Judgement, intolerance, meanness, double standards, misogyny, racism, sexism. We've got work to do.” Ariana Grande is not messing around.

After the tweet, she and Ariel Winter exchanged some girl-power love and Grande's fans thanked her over and over, all day.

At just 22 years old, the pop singer is already a legit feminist who speaks her mind about equality every chance she gets. This summer she made it clear that she doesn't want to be known as Big Sean’s ex, or defined by any man at all. “I’m just Ariana,” she told reporters who were prying into her sex life. Can we get a heck-yes for Ariana? By standing up for herself over and over (and over) again, she sets an example for all of her fans, most of whom (well, not me) are still in high school, staring at themselves in the mirror dancing to focus. She makes it look cool and sexy to speak your mind, tell men when they’re being misogynists, and how to not let yourself be defined by your romantic relationships.

In other words, Grande's pretty hardcore. And we could all use a little more of that in pop culture. Just shut the haters down.