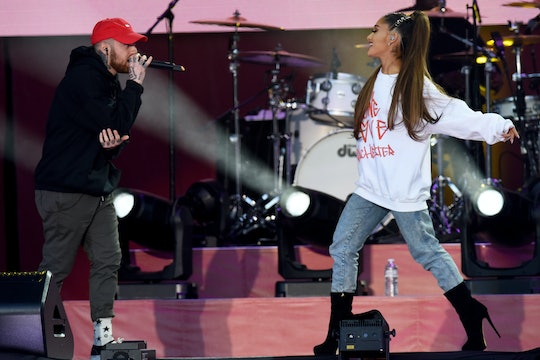 Ariana Grande's Ex Had A Surprising Reaction To Her Engagement

No matter how long a couple has been together — and how "consciously" they "uncoupled," it's always going to sting a little bit when an ex goes on to have a successful relationship. And when they wind up engaged just weeks after that breakup? Ouch, man. As it turns out, though, not all former lovers feel resentful when their ex gets a marriage proposal. That's because Ariana Grande's ex, Mac Miller, just said the sweetest thing about her engagement. And perhaps we should all aim to be as positive and humble, yeah?

For those who may be a little fuzzy on the timeline of Grande's recent relationships, allow me to refresh your memory. She and rapper Mac Miller dated for about two years before they called it quits in May — soon after which Grande began dating Pete Davidson from Saturday Night Live, as ET Canada reported. So one might assume that Grande's former beau has been feeling pretty salty about his ex's newfound love. But in reality, that couldn't be further from the truth.

As People reported, Miller recently appeared on Zane Lowe's World Record on Beats 1 on Apple Music, and there he spoke about his former relationship with Grande. “Life is stressful,” Miller, 26, said on Monday. “So, of course there were stressful times. It’s not that unique. You know, like, I was in love with somebody. We were together for two years. We worked through good times, bad times, stress, and everything else. And then it came to an end and we both moved on. And it’s that simple, you know.”

“It’s strange. Like, the whole thing is a little strange but it’s not negative,” he said about the breakup and subsequent engagement. “It’s just a part of something that’s going to continue to help make me who I am." Miller continued:

You know, it’s all positive energy. I am happy for her and moving forward with her life just as I’m sure she is with me.

OMG, he's happy for her, guys! Even if it isn't entirely true, the fact that Miller said this on record is incredibly sweet. Despite the personal struggles he's had since his relationship ended with Ariana Grande — like crashing his car into a pole after driving while allegedly under the influence — it seems like Miller is in a much better place these days.

As for Grande, her whirlwind relationship with Davidson so soon after calling it quits with Miller has shocked the singer's followers. Reports that the pair were engaged after dating for only a month started swirling in early June, along with photos of Grande wearing what appeared to be an engagement ring. According to Cosmopolitan, Grande seemingly confirmed the news when she responded to a tweet from one of her followers that read, "I hope he know he is maRRYING US AS WELL." To that, she answered, "HAHAHAHAHAHH HES BEEN BRIEFED."

Davidson also confirmed the news during an appearance on The Tonight Show Starring Jimmy Fallon, as the Today Show reported. "You know you didn't have to get engaged to Ariana Grande to come on our show," Fallon said to the SNL star. "But I did, though," Davidson replied, which was met with an enthusiastic round of applause from the audience. "I feel like I won a contest. It's so sick. It's f*ckin' lit, Jimmy. It's so funny walking down the street because dudes are walking by and they're like *makes a hat-tipping gesture*. Some dude came up to me and was like, 'Yo, man. You gave me hope.' I'm like, 'I didn't know I was that ugly, Jesus.'"

It's difficult to argue that Ariana Grande and Pete Davidson aren't head-over-heels in love with each other. And honestly, I'm not sure anyone will ever know how Mac Miller truly feels about Grande's engagement to Davidson. Although the rapper seems to be taking the high road in saying that he's happy for his ex, I'm guessing deep down inside it still stings a little. (I mean, they were together for two years, after all.) Still, it's refreshing for Miller to wish Grande well and send out "positive energy" to the newly engaged couple. If only more people in similar situations could take on the same attitude.