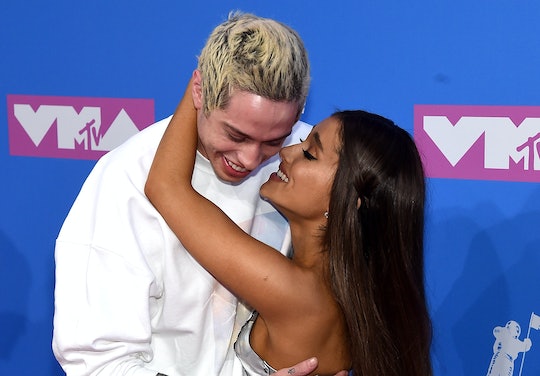 I must confess: I'm a bit of an Ariana and Pete aficionado. In case you've been living on Mars, let me add some last names and details. We're referring, of course, to the gifted singer and criminally adorable Ariana Grande, 25, and the hilarious young Saturday Night Live star Pete Davidson, 24. For reasons not quite clear to me, I found their relationship enthralling — enough so that I hitched my "If Ariana and Pete can't make it, romance is dead!" cart to the engagement, internalizing it as many of us did previously with couplings like Jennifer Aniston + Justin Theroux, Anna Faris + Chris Pratt, and Amy Poehler + Will Arnett. Many of us who get invested in these shiny new relationships are, ourselves in long-term relationships, yet we look to them as thought they might teach us something.

According to this timeline from Elle, Pete and Ariana first met two years ago on the set of SNL in March 2016, but there was apparently no hanky panky until just weeks before they became Instagram official on May 30, 2018. Days later, Pete had donned two Ariana-themed tattoos, and right around this time, the pair was engaged.

I had no idea then that Grandson was not long for this world. But reflecting on their relationship now, they were a classic example of the problem with passion.

I made a habit of regularly checking in on both Pete and Ariana's Instagram accounts to see the latest disgustingly adorable pictures of them snuggling in matching hoodies and commenting on one another's pictures with exasperatingly bad grammar.

As unbelievable as the relationship seemed in hindsight, I kind of bought it. I wanted to believe that Grandson was just so right that no time was needed to settle in and get to know each other. As though somehow Ariana's otherworldly ponytail was powerful enough to shepherd this couple from the early days of courtship (the "what u up to?" texts and couple selfies) to Serious Long-Term Relationship.

I made a habit of regularly checking in on both Pete and Ariana's Instagram accounts to see the latest disgustingly adorable pictures of them snuggling in matching hoodies and commenting on one another's pictures with exasperatingly bad grammar. They seemed like such an unexpected couple, but I was infatuated with how they were drawn together like bears during mating season. They had it bad for each other, and that was so intriguing.

Monday morning this week started like most: My husband and I spooned until we were coherent enough to reach for our phones, turned our backs to each other, and started scrolling.

Somehow, despite my fandom, my husband beat me to the punch.

"Pete and Ariana broke up," he announced.

I was stunned. But they were so CUTE. So.... troubled. They both had been reportedly wrestling with their own tragedies and difficulties: Ariana with the suspected drug overdose death of Mac Miller and the Manchester Arena suicide bombing, and Pete with a borderline personality disorder diagnosis. Add to that the glare of celebrity, the pressure of being watched, shipped, stanned.

As a parent, I understand the way a relationship can warp under external pressure — I have given birth to two adorable manifestations of external pressure — so I shouldn't have been surprised at all by the end of Grandson. The births of my children, however, came at a time when my relationship was well established and my husband and I were accustomed to the evolution.

Ariana and Pete's relationship had moved at the speed of light. It was fast and furious, and probably not based in reality. They'd obviously been caught up in passion, which can be a dangerous place to be.

They had passion, but were lacking the other necessary elements of a successful relationship. They needed to put in the work. Wait for the passion to wane and the love to grow.

Passion can numb good judgement. Just ask 17-year-old high school me, swept off my feet by a boy I met in drama class who was kind of a jerk and not into me at all. We follow each other on social, and there is not a residual trace of whatever it was got me so riled up about him back then: perhaps the mere fact that he didn't like me.

Psychology backs passion as being an important element of a lasting romantic partnership, but in combination with intimacy and commitment, according to Psychology Today.

"Intensely passionate courtships might be dangerous. They can translate into marriages characterized by disillusionment," wrote Dr. Theresa E DiDonato for Psychology Today. "A recent study showed that the amount of affection experienced between married individuals who had highly-passionate courtships peaked right after marriage but then declined rapidly over the first two years."

Or, in the case of Grandson, that passion probably declined after the first two months.

The truth was, Pete and Ariana hardly knew each other. They clearly had a spark of attraction between them, maybe ignited by the monotony of dating their previous partners for several years. They ran with that spark, getting tattoos representing one another. Pete reportedly even gave Ariana a pendant that belonged to his late father, a firefighter who died in the September 11 terrorist attacks in New York City. Then that spark fizzled, and so did their relationship.

They had passion, but were lacking the other necessary elements of a successful relationship. They needed to put in the work. Wait for the passion to wane and the love to grow. Wake up next to each other with morning breath and roll over to look at their phones a few thousand times. There are no shortcuts to true love.

Editor's Note: A previously version of this article incorrectly identified Justin Theroux. It has been updated.