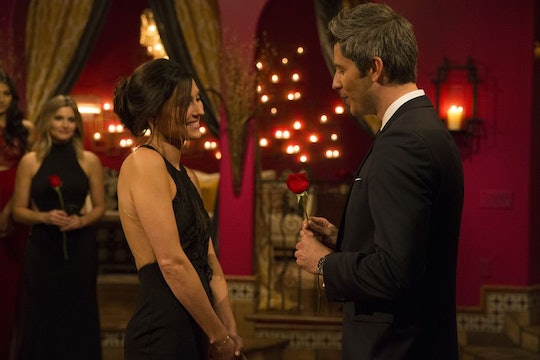 Arie & Becca's Date On 'The Bachelor' Is Problematic For This Reason

The lucky recipient of Arie's very first one-on-one date was Becca K., the 27-year-old publicist from Minnesota, and when he pulled up on a motorcycle, everyone could tell the day's theme was going to be sweeping her off her feet. But some fans are debating whether Arie and Becca's date on The Bachelor is problematic.

Their first date involved Becca meeting stylist Rachel Zoe, modeling a bunch of dresses and shoes, getting surprised with a case of Neil Diamond jewels, and then sporting her new wardrobe out to dinner. Between the styling portion of the date and the evening's dinner, Becca was forced to return to the mansion with a bunch of designer shopping bags in tow, in plain view of all the other contestants. There was much squealing and probably some envy from the other women as she recapped the day, but Becca expressed feeling sheepish and embarrassed over rolling up to the house with such expensive gifts in front of the other women. (For their part, they were all pretty supportive and did their best to reassure her that she had nothing to feel bad about.)

After dinner, Arie also sprang on Becca that she would get to keep the Neil Lane earrings that came in the jewelry set. She was obviously super overwhelmed by the whole day (which also included bringing home a pair of Louboutins), but Becca expressed lots of surprise and gratitude on the date.

And while Becca seemed appreciative of the gifts, if somewhat overwhelmed, it's not lost on people that the date had kind of a Pretty Woman vibe to it — and not in the good way. Of course, there's nothing wrong with showering your partner with gifts; gift-giving is one of the five love languages! But given that Arie didn't know Becca before lavishing her with a pricey wardrobe, it understandably felt a little off to some viewers. Plus, the portion of the date where Becca was modeling different spangly dresses and parading them in front of Arie could have been seen as objectifying and a little shallow.

Again, if Becca likes the idea of shopping with her boyfriend and showing off outfits for him, then great! But the fact that Arie sprang it on her without checking in to see if she would be comfortable with it or not may have been what left a bad taste in some viewers' mouths. The power imbalance between him and the contestants is already so vast that it's probably a better idea to put the women in situations that are guaranteed to empower them, rather than to flex his control by forcing them to put on a private fashion show for him. Not to mention, he already gets enough of that at cocktail parties.

Luckily, not all of Arie's dates have been quite so materialistic. For his one-on-one with Krystal, he flew her back to his hometown of Scottsdale, Arizona to meet his family, visit his high school, and even see his home, where they cuddled up and watched embarrassing home movies of him. Obviously, the dates were intended to stand in juxtaposition to one another. One was meant to show Arie's dashing side and the other was meant to show him as an emotional and vulnerable, family-oriented guy. They both contribute to Arie's overall character, but it's a little unfortunate that Becca's date with him couldn't go a little deeper.

Hopefully, she'll get the chance to show him that she's more than just a stunning mannequin for clothes, jewelry, and Louboutins later on this season.