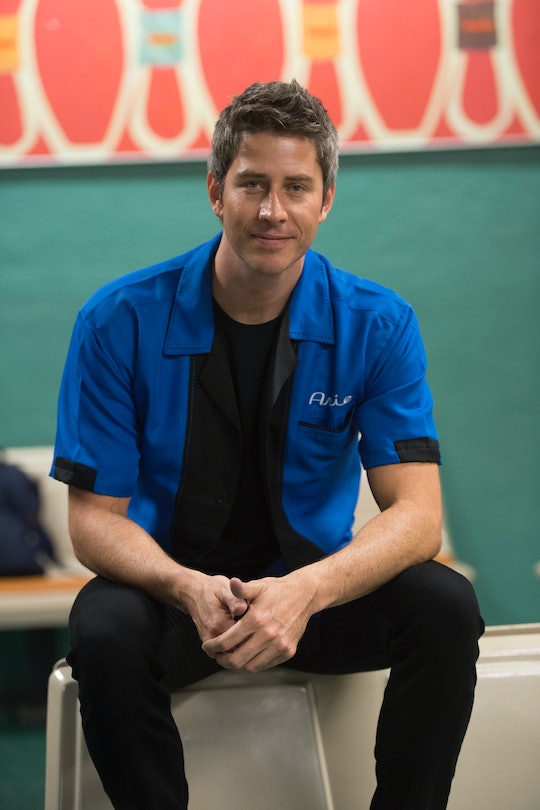 At the beginning of every group date on The Bachelor, the cameras film Arie doing something sexy — staring into the distance or perhaps hopping on his motorcycle. But in Week 5, he may have taken it a step too far. Arie licked a bowling ball on The Bachelor group date and Twitter is freaking out. I hope he at least sanitized it first. Shudder.

Week 5 sees the ladies in Ft. Lauderdale, Florida, where Arie Luyendyk Jr. took the women he's hoping will fall in love with him bowling. For those of you who are thinking that this doesn't sound like the sexiest date The Bachelor has ever come up with, well Arie tried his darndest to change everyone's mind about that. His strategy included a close up shot of Arie alone in the alley, ready to throw his bowling ball (is there a technical term for this) and staring down the 10 pins at the end of the lane with his best Clint Eastwood squint. He turned it up a notch by sticking out his tongue and giving the ball a long, luxurious lick. Sorry, I think I just threw up a little bit in my mouth. And clearly Twitter agreed.

Clearly this season The Bachelor is trying to get the most mileage possible out of Arie's supposed superior kissing skills (though I'm beginning to have my doubts). Arie's make-out sessions have been all over the place this season. As in, they've happened everywhere the group has gone. Arie has a hardcore make-out every time he hangs out with one of the women, starting on the very first night with Chelsea. I'm more familiar with Arie's tongue and kissing style than I ever expected to be.

Arie has said on the show that he tends to "lead with chemistry," which appears to be obvious. On Week 5, Arie told Becca to just "kiss the hell out of me." OK, we get it Arie, you love to make-out. But did you have to do that to the innocent bowling ball? When you think of bowling alleys and bowling balls, the words "squeaky clean" don't automatically come to mind, so it's certainly not the sort of place you just want to stick your tongue willy-nilly. Unless that was Arie's own bowling ball, in which case I have a lot more questions.

But Arie's tongue wasn't the only focus of Monday night's episode. Viewers also got to see the long-awaited temper tantrum from Krystal. It turns out she was upset that Arie originally promised that the winning bowling team only would get to go on the group date afterparty. But then he seemed to realize that this was a little mean and changed his mind. Krystal, who was on the winning team, decided to boycott the afterparty and called Arie a liar. Tensions rose as all the women had pretty much reached their breaking point with Krystal. Even Arie seemed disappointed and addressed her behavior with Krystal directly.

If everyone thought this would be the last of "Hurricane Krystal," previews show that she makes it at least one more week. It may seem mean but I kind of hope she doesn't make it much further. But one thing I do know is that Arie's tongue is here to stay.