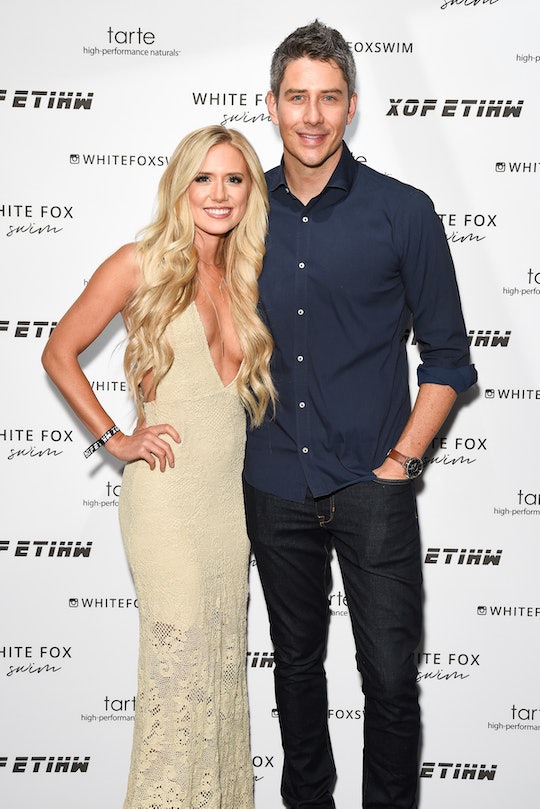 Arie Luyendyk Jr. and Lauren Burnham's entire relationship has been on camera since they started dating on The Bachelor last year. Since their engagement last year, fans have watched them plan their wedding, get married, and plan for the arrival of their daughter. This means, of course, that fans were there for Luyendyk and Burnham's baby shower, which looked very interesting, to say the least.

Burnham is expected to give birth in early June, which is so soon. This means that the couple is heavily preparing for and celebrating their baby's impending arrival. They did some major celebrating on Saturday, when a baby shower was held at their home in Arizona in honor of their little girl, according to People.

The shower seemed pretty traditional and super fun. Guests played games (including a bottle chugging game and a belly measuring game) and snack on a very impressive spread, which also included a waffle and fruit bar, according to People. Unlike some other celebrities who also had their baby shower this weekend (I'm looking at you, Kim Kardashian and Kanye West) the couple didn't rely too heavily on a theme — but there was plenty of pink at the shower to remind everyone of their baby's sex.

Just based on the photos alone, it looks like the shower was so much fun.

But their shower wasn't super traditional for one reason. In addition to their super fun games, the couple also had a live ultrasound scan done at their shower. Yes, Burnham actually had an ultrasound done in her living room while her friends and family members got to watch the baby in real time, projected onto their TV.

It's a little unclear what their fans thought of this activity (especially since the couple only posted shots from the party on their Instagram stories) but it certainly proves how unique the couple is. They're not afraid of cameras or being on screen and clearly their baby isn't, either.

It's just as unclear if this is an activity that the couple has witnessed at showers they've been to. In 2013, ABC News did a report on sonogram parties, a pregnancy trend that was "growing in popularity" at the time. These parties were meant to not only celebrate the couple and their baby, but have their friends and family members witness the "miracle of life." But as much fun as it looks, doctors recommend that ultrasounds should be performed for medical reasons only, not for the entertainment of others, according to ABC News.

No matter what people thought about this little display, it's very clear that the couple loved it either way, and having a shower is bringing them one step closer to meeting their baby girl in June. The couple told Us Weekly in November that they're super ready to meet their little one, they're just afraid that they will not choose the right name for them and then will have to watch them "get made fun of for the rest of their life."

But that doesn't seem to be the case. The couple has hinted on their baby's Instagram account (yep, that's an Instagram account for their baby) about the baby's name and the couple seems super confident about it, too. Based on the shower, it's obvious that the couple has nothing to worry about — they're clearly so excited to welcome their daughter and just as excited to share her with the rest of the world.