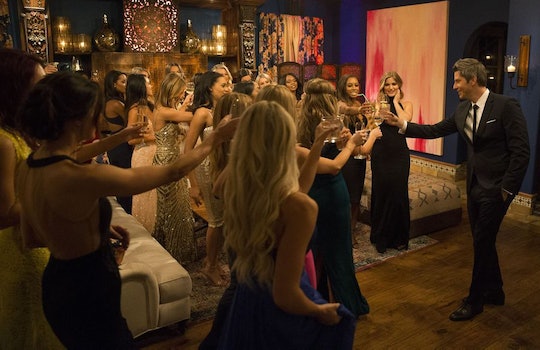 ABC's newest pick for The Bachelor stirred up a mix of confusion, controversy, and surprise amongst fans when producers decided to go with yet another unconventional choice following Nick Viall's casting. Arie Luyendyk, Jr. was last seen on The Bachelorette all the way back in 2012, when he came in as Emily Maynard's runner up. Understandably, given the timing, some viewers are curious about Arie's age compared to his Bachelor contestants. After all, his first attempt at this was five years ago. Wouldn't that make him significantly older than the average Bachelor pick, and way older than the contestant pool? Worry not: he's only 36 years old, which actually makes him a year younger than Viall, a target of much teasing for being the old man on campus when he was the Bachelor.

As for Arie's contestants, they range in age from 23 to 33, with most of them in the 25-26 range. It was disappointing to see that the show didn't put more effort into skewing the ages of the women upward to match the Bachelor's during Nick's season, and it doesn't seem like any strides have been made in that area this time around, either. The woman closest in age to Arie, a recent masters graduate named Lauren J., is still two years younger than him. It would have been nice to see some women his own age, or perhaps even older, get cast — even and especially if that meant that having babies together wasn't necessarily on the menu. It could have been really cool to see those conversations play out in the spotlight, but alas, we're going to have to wait for an openly child-free Bachelor contestant.

On the other end of the spectrum, another potential source of drama looks like it might be how young one of the contestants is. Bekah M., an aspiring art teacher and nanny from Fresno, CA, declined to give her age in her Bachelor contestant bio. In the promo for Arie's season, the other women openly wonder whether her age could be a deal-breaker for Arie, and mention that she's been reluctant to tell him how old she is. Presumably, if she's uncomfortable with it, she must be younger than the handful of 23-year-olds on the show this season.

We do know that The Bachelor has a minimum age requirement of 21 (I mean, duh, look at all that freely flowing alcohol). And some Instagram detective work/math seems to suggest that Bekah M. celebrated her 21st birthday in February of 2016. That would have made her just barely 22 when filming started. Twenty-two and 36 is a pretty significant age gap, but Arie seems totally taken with her in the promo footage, suggesting that they clicked in spite of it. And in truth, some couples just prefer to function inside a life experience gap, with one person offering maturity and wisdom, and the other offering youthful energy and enthusiasm. In the real world, it's really only a problem if either person wants an exact life experience match. But plenty of people don't necessarily.

Of course, in the insular world of The Bachelor, where all problems become magnified, Bekah winds up in tears, apparently because the other women are giving her a hard time about her age. (Though we've been tricked by such suggestive editing before.) We'll have to wait and see whether she can stand up to the pressure — or whether it's really a problem for Arie — when The Bachelor premieres on Monday, Jan. 1 on ABC.