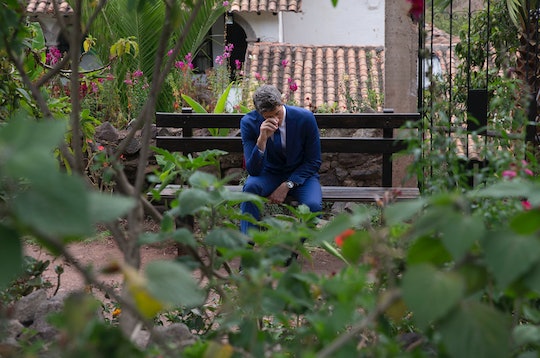 On Monday night, Chris Harrison promised Bachelor Nation a shocking season finale. As the last two contestants, Becca and Lauren, met Arie's family, a weirdness started to creep in, especially when it came to Becca's visit with her possible future in-laws. Arie's family kept bringing up Lauren to Becca on The Bachelor and it made both Becca and viewers uncomfortable. Arie kept saying he's in love with both Lauren and Becca, and that definitely impacted how his family saw them upon meeting. It didn't help that Becca met them after Lauren, so they couldn't help but compare the two.

Since this season began, Arie and producers have been hinting that this season culminates in something big. It all began when Arie admitted he fell in love with more than one woman during the season. "I told more than one person that I was in love and it made it hard for me. I think that I didn't really expect that," he told ABC News before the season began. "I didn't know that I had that capacity to love more than one person at a time and I think that's something that some of the bachelors go through and it's difficult. But I'm glad that I left myself open and got to experience that, for sure."

Both Lauren and Becca met Arie's family during the finale. Lauren went up first, and when it was Becca's turn everyone couldn't help but mention Lauren. Becca was visibly uncomfortable — as were fans on Twitter:

I suppose Bachelor Nation should've known that this finale would not be like others. This is because, despite how boring viewers may find Arie, he did something unprecedented on The Bachelor: he said "I love you" pretty early on to Lauren. I always thought that the leads weren't allowed to say the phrase when a contestant reveals they're falling in love, even if they are feeling that way. Arie, however, revealed that it's OK that he does... it's just that it was an "unspoken rule" not to.

In an interview with PopSugar, Arie discussed telling Lauren he loved her at that point. "Watching previous seasons, the Bachelor doesn't usually reveal how he feels about somebody," Arie said. "I went and asked production, 'Can I tell this person how I feel about them?' And they said, 'Yeah, of course, do whatever you want.' So I did." And, eventually, Arie also told Becca that he loves her... so he told two women he loved them whereas previous Bachelors didn't say it at all until the end.

Which brings us to the finale. Chris Harrison assured that there hasn't been a more dramatic ending, and the beginnings surely set viewers up for it. During the visits with Arie's family, it seemed different than in year's past. Arie's parents, brothers, and in-laws seemed preoccupied with Lauren during Becca's time with them. They assured that they liked both of them, but for some reason they fell into comparisons.

Actually, at the end of both dates, they revealed that they believed Becca was a better fit for Arie. They said that he knows his decision best, but that's how they feel. I was a little surprised that was their conclusion considering how much they mentioned Lauren, but perhaps when comparing the two Becca gave off the better impression. All I know is, Bachelor Nation is in for a wild ride the next couple hours. And it didn't seem that his family helped him a ton in his decision-making. Thankfully, that parent visit is done, so the awkwardness for both Becca and viewers is over... but there's a whole lot more awkward coming our way.