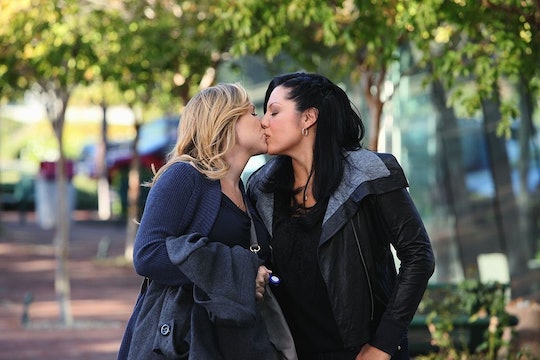 Arizona & Callie Need To Get Back Together, & Here Are 5 Reasons Why

When Arizona Robbins appeared in Season 5 of Grey's Anatomy, Callie Torres was just figuring out her sexuality. While they made out in the bathroom of Joe's, neither of them probably realized how much the other would impact their lives. Now, seven seasons later, the Calzona ship has been through it all. There were Callie's unaccepting parents (her dad eventually got on board), Arizona leaving for Africa but then coming back, Callie's unplanned pregnancy, the car crash, their wedding, Arizona's plane crash. Then the leg, the miscarriage, Arizona's cheating, the marriage therapy, the divorce, and finally Sofia's custody battle. Yeah, these two have been through a lot. But, will Callie and Arizona ever get back together on Grey's Anatomy?

Earlier this season it seemed like Callie and Arizona had actually reached a level of friendship. Callie was dating Penny, and Arizona was dating again. They were happy until the custody battle tore them apart. With all the implications that Arizona was too busy working and going out to take care of Sofia that were said in the court room it'll be tough for Callie and Arizona to ever get back to a good place. Those words hurt Arizona and Callie losing custody of Sofia hurt even more. Still, one can't help but root for these two to make it work. Here's just a few reasons why they're better together instead of apart.