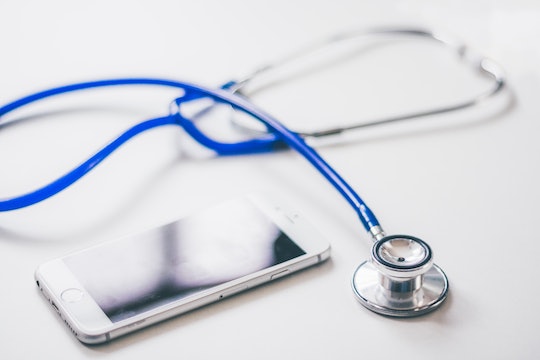 If there is one thing that anti-choice legislators and advocates are good at, it's finding ways to block women from having safe, legal abortions with tricky legislation. Just take the new Arkansas measure that requires a patient investigation by a woman's abortion provider before she can actually get a medical or surgical abortion. The bill, H.B. 1434, was signed by Arkansas Gov. Asa Hutchinson this week. On its face, the bill is problematic in that it's an invasion of privacy and completely ridiculous. But what's worse is that this practice is now legal because it was passed under the guise of preventing women from getting an abortion based on the sex of their fetus.

It's called the "The Sex Discrimination By Abortion Prohibition Act" and was introduced as a way to prevent sex discrimination, since in other countries there are laws that value male fetuses over female ones. Rep. Charlie Collins, who introduced the bill, called it a "simple, straightforward idea." But don't be fooled. It's not.

H.B. 1434 essentially turns abortion providers into investigators who would be charged with a "Class A misdemeanor, have his/her medical license suspended or revoked, and may also be enjoined from future abortion procedures" if they don't comply with the law.

The law requires that abortion providers spend “reasonable time and effort” to look into the patient’s entire pregnancy history before administering an abortion, which, as it should go without saying, is a constitutionally protected medical right. This not only gives abortion providers the right to police women’s reasoning for having an abortion — because the law doesn’t specify the timeline for the doctor to complete their investigation, it could lead to an indefinite waiting period for the patient. The investigation could take so long that a woman would then no longer be able to legally get an abortion within 20 weeks, after which abortion in Arkansas is prohibited unless the woman’s health is in danger.

In fact, the bill purports to care about women’s health. Providers would not only be able to investigate the reasons a woman wants to have an abortion, but also be able to have access to all of their medical and “pregnancy history.”

This bill is steeped in discrimination and misinformation about abortion. For one, it is based on the fact that in some countries male infants are valued more than female ones. Lourdes Rivera, Senior Vice President at the Center for Reproductive Rights said in a statement:

When a woman has made the decision to end a pregnancy, she needs high-quality health care, not an interrogation. Measures of this kind are fueled by harmful and racist stereotypes about women of color.

Rivera was also concerned that the bill "will discourage women from getting the health care they need and unfairly targets communities of color," given the racial stereotypes about countries that value male infants over female ones.

The bill is also sneaky in suggesting that lawmakers were worried about women's health. There is an entire section devoted to the debunked risks abortion poses to women's reproductive and mental health after an abortion, which is why providers are being mandated to investigate a patient's "pregnancy history." (Abortion does not affect a woman's health nor does it lead to depression.)

It's hard to tell whether the bill's statement that "women are a vital part of our society and culture and possess the same fundamental human rights as men," is tongue-in-cheek or not, because this bill takes away a woman's fundamental right to autonomy over her own body and her civil right to an abortion, as prescribed by Roe v. Wade.

Already, women in Arkansas must go through in-person counseling that includes information to discourage an abortion and then wait 48 hours to get the abortion pill or have a surgical abortion. Minors must receive parental consent. In other words, women in Arkansas essentially do not have reasonable access to safe abortions, as ordered by the Supreme Court of the United States.

Don't let this little "sex discrimination" act fool you — it has absolutely nothing to do with "balancing the population" (the bill's words, not mine) or valuing women in society. If it did, women would be able to ask for and receive a safe, affordable, and expedient way to terminate their pregnancy — whatever their reasons.