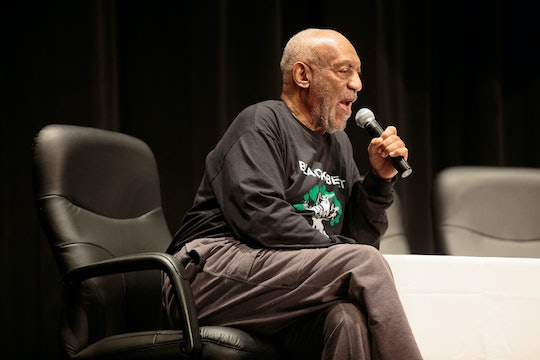 After over a year of allegations from dozens of women, an arrest warrant was issued for Bill Cosby Wednesday morning for his alleged 2004 sexual assault of former Temple University employee Andrea Constand, according to People. Constand alleged that Cosby drugged and sexually assaulted her at his mansion in Elkins Park, Pennsylvania, in January 2004, according to People. Cosby has previously said their interaction was consensual.

Cosby's representative, Christopher Tayback, did not immediately respond to Romper's request for comment. It wasn't immediately clear exactly what Cosby will be charged with, just that Montgomery County, a county in the suburbs of Philadelphia, issued the arrest warrant, according to NBC News. A source close to the investigation told NBC that Cosby will face criminal charges.

Update: Montgomery County District Attorney Risa Vetri Ferman announced Wednesday that Cosby was charged with aggravated indecent assault, a first-degree felony, according to NBC News. At his arraignment Wednesday, Cosby's bail was set at $1 million, according to Variety. He was expected to be released Wednesday afternoon after arranging for the bail. His charge carries a prison sentence of five to 10 years and a fine of up to $25,000, according to Variety.

Constand claimed that she first met Cosby in November 2002, about a year after she started working as operations manager of Temple's women's basketball team, according to People. She said she and Cosby became friends, and in January 2004, he invited her to his mansion to talk about her career path, according to a civil lawsuit she filed against Cosby in 2006. She said that, while she was there, she was feeling stressed about her next career move, so Cosby offered her "three blue pills, which he told her were herbal medication, which would help her relax," according to the lawsuit, cited by People.

Shortly after taking the pills, Constand said she felt weak, shaky, and had trouble maintaining consciousness. Then, while semi-conscious, Constand alleged that Cosby sexually assaulted her. She lost consciousness and woke up "feeling raw in and around her vaginal area" with her clothes and undergarments "in disarray," according to the lawsuit.

In 2005, then-Montgomery County District Attorney Bruce L. Castor Jr. declined to file criminal charges because he said there wasn't enough evidence to prove Cosby guilty beyond a reasonable doubt, according to the Philadelphia Daily News. Cosby settled the civil suit with Constand with a confidentiality agreement, which Cosby's lawyers say Constand has violated by bringing the allegations back into the spot light and which Constand has been fighting to undo, according to Variety.

Incoming Montgomery County District Attorney Kevin Steele, who used the issue to drive a wedge between himself and former district attorney Castor, said he would seek justice, according to NBC News:

Upon examination of all of the evidence, today we are able to seek justice on behalf of Mr. Cosby's victim.

Dolores Troiani, who represents Constand, said she and her client will cooperate fully with the investigation, according to People:

Obviously we appreciate the expression of confidence in her. We'll have to see what happens. We hope justice will be done.