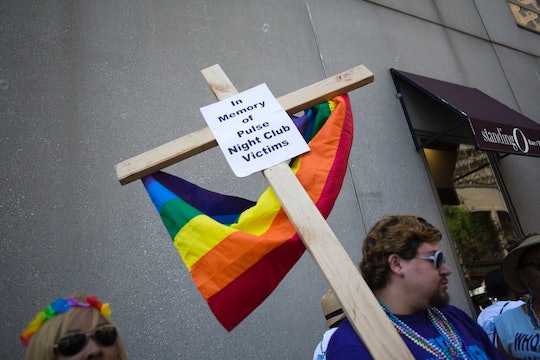 The world woke up on Sunday to the horrifying news of a mass shooting at a gay nightclub in Orlando. The attack left at least 50 people dead, with 53 others hospitalized. It's a moment where it's easy to fall into hopelessness about the state of the world, but the reaction to the massacre has included reminders of the good side of humanity too, including some of the beautiful art paying tribute to the Orlando shooting victims.

In response to the worst mass shooting in United States history, perpetrated by a lone gunman with a valid firearms license, the White House called for flags to be flown at half-mast to honor the victims. In Orlando, urgent requests for blood donations led to massive lines at blood banks, and the website of the area's primary blood donation organization received so many visits that it crashed. Organizations like Equality Florida set up places where people could donate to the victims and their families, and were flooded with donations. And on social media, people all over the country and the world sought to express their support for the LGBT community, as well as all the others affected by the attack, with hearts and rainbows abounding.

Of course, all the beautiful art in the world on social media doesn't change the fact that at least 50 people had their lives needlessly taken away from them through an act of hatred. As we express our solidarity with those who are hurting, and with a community who has been targeted far too often by hate crimes, we also need to look forward into the future, and at how we can prevent such acts from happening again. There are many ways to do so, whether it's by contacting your elected representative about gun control, working to change attitudes about the LGBT community, or doing your best to ensure that we don't elect as our next president a man who promotes hate, and whose response to this attack is the following, startlingly non-empathetic tweet:

In other words... stamp out hate with love by retweeting the beautiful art, graphics, and messages today instead of focusing on Donald Trump.