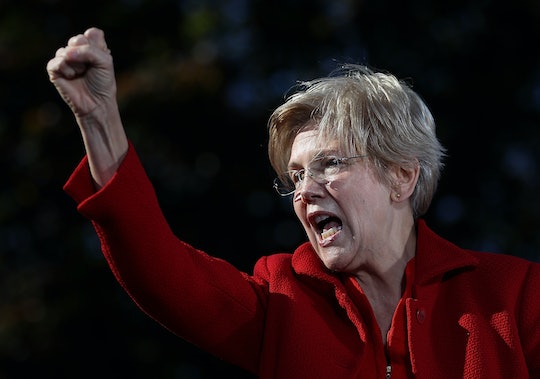 Artist's "Mom Version" Of Viral Piece Is Spot On

“She was warned. She was given an explanation. Nevertheless, she persisted.” Those were the words Senate Majority Leader Mitch McConnell used to describe Sen. Elizabeth Warren's attempt to read a letter during Sen. Jeff Sessions' Feb. 7 nomination for U.S. attorney general written by Coretta Scott King in 1986 condemning Sessions. Sessions was later confirmed for the position, and is now in hot water after failing — during those same Senate confirmation proceedings — to disclose two meetings he had with Russia's ambassador to Washington prior to the election. But the words McConnell spoke about Warren's attempt became a battle cry for women the world over, and this artist who created a viral "nevertheless, she persisted" piece made a version about moms that is spot on.

When McConnell said what he did about Warren, he likely had no idea the firestorm he would set off. But many women could relate to the phrase "nevertheless, she persisted," and artist Courtney Privett is one of them. She set out to create and share several pieces of artwork on Instagram that include the quote, along with word bubbles that include many common phrases women hear that can be taken in a demeaning, or even humiliating, way. On Monday, she posted a piece in this series called the "mom edition," — it includes word bubbles like, “I lost the weight easily," and "I'd never let my kid do that."

Part of Privett's caption for the image read,

#ShePersisted, Mom edition. From the moment we make a pregnancy or adoption intent public, we are bombarded with commentary, much of it conflicting. 15-20% of new mothers experience a postpartum mood disorder such as postpartum depression, anxiety, OCD, psychosis, bipolar disorder, and PTSD.

She also noted, "fathers and adoptive parents can also develop these disorders."

Privett spoke with The Huffington Post about the piece, and said that all the questions and thoughts in the world bubbles are things that have been said to her or toward her friends and family, so she's speaking from personal experience as a mother and someone who other mothers and parents confide in. Her Instagram has several other "editions" in the "nevertheless, she persisted" series, but this one in particular is resonating with many.

Privett told Huffington Post that she hopes her work can be an encouragement for parents:

I’m hoping to encourage parents that it’s OK to do what is right for their specific situations, and also for all people to be more aware of how they speak to others...Words matter, especially when directed toward vulnerable people.

McConnell's statement is getting some attention again now that Sessions has recused himself from any investigation related to President Donald Trump's 2016 presidential campaign, after it was revealed that he failed at his Senate confirmation hearing to disclose two meetings he took with Russia's ambassador to Washington before the election, when the country was accused of interfering in the presidential race Trump won. It was during his confirmation proceedings that Warren tried to read Coretta Scott King's letter about Sessions, when McConnell silenced her. But Privett has been creating these "nevertheless, she persisted" pieces for weeks.

On her Instagram, Privett has pieces related to women working in STEM fields, a genderqueer/nonbinary edition, one related to ageism, and many more.

But it's the "mom edition" that's getting special notice. Privett told The Huffington Post she personally experienced perinatal depression while pregnant with her third child and postpartum depression after giving birth, and that all the hurtful remarks she’d heard for years as a mother came back to her during that time.

With medication and therapy, both individual and in a group setting, Privett was able to recover, but she knows many moms don’t have the resources to do the same. That experience, along with suggestions from her Instagram followers, inspired her to create a work of art for moms who persisted. And the "mom edition" was born.