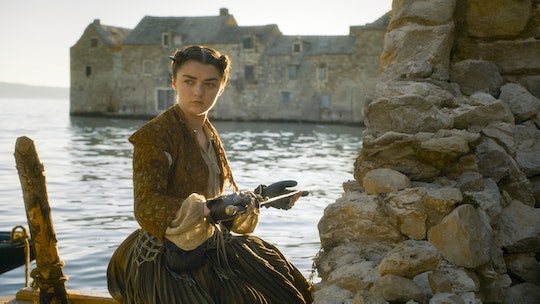 The final scene of the Season 6 Game of Thrones episode "No One" features a thrilling chase between The Waif and Arya Stark, which, in spite of her multiple stab wounds and what must be some serious internal bleeding, Arya somehow wins. Arya kills The Waif on Game of Thrones, and her next stop is Winterfell.

After successfully escaping her own assassination attempt, Arya finds temporary refuge with Lady Crane, who nurses her back to health — after two stab wounds — with nothing but soup and bandages. OK. Sure. But Arya knows she isn't safe there and she knows she can't take Lady Crane up on her offer to run off with the theater troupe. She knows The Waif is still looking for her.

One night of sleep later, The Waif finds her, kills Lady Crane, and Arya is somehow feeling nimble enough to jump off a second floor balcony to the street level to escape her. Is milk of the poppy actually PCP? We may never know. The Waif chases Arya through Braavos, and they wind up back at The House of Black and White. Arya is heavily bleeding from her stab wounds at this point, thanks to taking a nasty tumble down a long flight of steps. In fact, she leads The Waif right to her, because, as she stumbles through the streets, she's leaving traces of blood everywhere she goes. "Amateur move." —Donald Trump to Arya Stark, probably.

The Waif thinks she has Arya for sure, but Arya has Needle and one other vital skill. When The Waif finally finds Arya, it's cornered in a small room, lit by only one candle. Thanks to her weeks and weeks (months, maybe?) of fighting blindly, Arya figures she might be a better fighter than The Waif in the dark — the only discernible advantage she can think of while bleeding out. Just she lulls The Waif into a sense of impending victory, Arya snuffs out the candle in the room, forcing them to swordfight in the darkness.

While we don't see the fight play out on screen, Jaqen later spots a pool of blood in the temple and sees The Waif's face (with her eyes stabbed out, naturally) on the wall of faces. He congratulates Arya on finally becoming no one, to which Arya triumphantly replies, "A girl is Arya Stark of Winterfell and I'm going home."