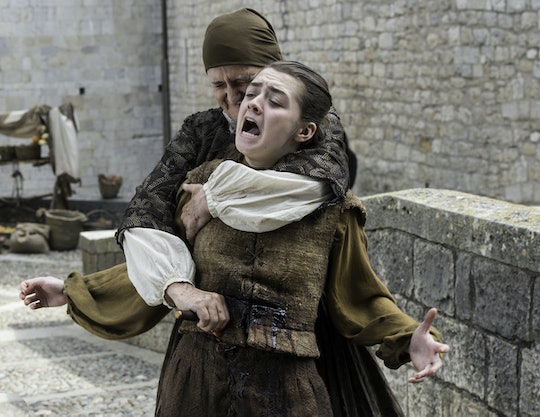 Arya Lives On ‘Game Of Thrones’ & She Makes A Close Confidant

The most surprising thing about Arya's recovery on Sunday's Game of Thrones wasn't the fact that she healed surprisingly quickly for someone who'd just been stabbed, like, five times in the gut. Instead, it was that Arya lives on Game of Thrones and her savior just so happens to be Lady Crane, the actress playing Cersei in the Braavosi play — the woman Arya was supposed to kill. We all remember her, right? The immediately motherly figure who was nothing but kind to Arya, and inadvertently convinced Arya not to go ahead with her orders to kill the woman. But in Sunday's episode of Game of Thrones, titled "No One", the actress Lady Crane did a lot more than say a few kind words to Arya. She actually nursed her back to health.

How she miraculously helped a young girl who'd just been stabbed several times heal and then be well enough to go running through the village is a Game of Thrones mystery, but it is what it is. Let's just thank the Many Faced God for a moment that Arya is alive and well (enough) and that now she's going to be able to leave Braavos and this slow moving, fan-abhorred story line. And not a season too soon really, since sh-t is about to hit the fan with her siblings back home in Westeros in the North.

Yes, that goes for all of her siblings. The only Stark kid who was missing from the North was Arya and it looks like, thanks to Lady Crane nursing her back to health with her mystery soup and elixir, she'll be able to reunite with her siblings in time to be back home in Winterfell. Of course this is Game of Thrones, though, so she may meet up with her fam later rather than sooner. Or even cross paths with The Hound before anyone else, for that matter. And it may not even be until the Season 6 finale of Game of Thrones that we see Arya on her journey. Or, you know, Season 7, since it might make sense to end Arya's Season 6 arc as they did in Sunday's episode.

The important thing is that Arya lives on Game of Thrones, despite the efforts of The Waif, and it's all thanks to the motherly Catelyn Stark look-alike Lady Crane. Even though Arya Stark is crafty enough to survive on her own, let's take a minute to be thankful that she had the chance to be a sick kid in bed avoiding school for at least a little while. Yes, that's the best equivalent to Arya recovering in bed from knife wounds, hiding out from her assassin.

Regardless of where Arya goes from here, or how long it actually takes Arya Stark of Winterfell to get home, she is finally leaving Braavos. Let's all breathe a collective sigh of relief.