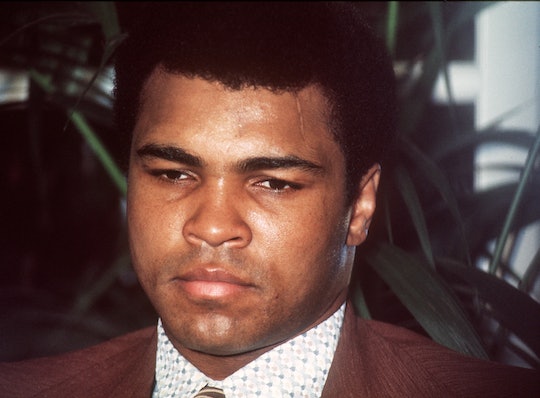 As A Black Woman, I Want To Remember Muhammad Ali Like This

I met the real Muhammad Ali in my late teens. Not in person, but the legacy he’d already begun to build in the black community. I was helping my dad do the books for his small mechanic shop on an off day. We weren’t in the shop to do work but there was, however, a black and white video of a fight playing on the dusty little television he had propped up on the spare parts and greasy tools. I have to be honest, the fight was boring. I didn’t pay attention to it. What kept me from my work on the massive pile of receipts my dad had in his desk, however, was the conversation my dad and his friends had between beers and cigars about Muhammad Ali.

More Like This
Pregnant Olympian Shawn Johnson Cried When Her Daughter Was Sad At Drop-Off
10 Hilarious Tweets That Perfectly Capture What Moms Are Going Through
Vaccinated People Can Ditch Masks. Where Does That Leave Kids?
Here's Everything We Know About 'Black Panther: Wakanda Forever'

“This m*ther f*ker told the government to kiss his ass, he ain’t going to no war. And he didn’t,” one of the guys bragged as he cackled and took a pull from his frosty can. “What black man do you know at the time...”

“When black asses was being lynched all over the country,” someone else said.

“Right? What black man could get away with that and still have white people loving his every move!?”

“Ali,” they all said in unison.

That afternoon, I learned about Muhammad Ali, a black man who talked his way into the hearts of white and black people during the heart of the Civil Rights Movement. A man who stood up to a government and a society that was hell-bent on denying black people the right to even pee in the same bathroom as a white man. I heard of a man admired and remembered for making waves at a time when black men were dying for nothing more than just existing with too dark a skin tone, and I got a history lesson that day.

Read these pieces and you can see a great man shaping up. An American hero. A great fighter. But what you don’t see is the real Ali.

In 1967, the great Muhammad Ali refused to be drafted into the military to fight in the Vietnam conflict. Most people will quote his famous words, “I ain’t got no quarrel with the Vietcong,” as the excuse. Sure, he said that. However, I learned that Ali also objected his induction to the military because he was Muslim — a faith that abhors violence. The champ also refused to fight because, as he said:

My conscience won’t let me go shoot my brother, or some darker people, or some poor hungry people in the mud for big powerful America. And shoot them for what? They never called me n---er, they never lynched me, they didn’t put no dogs on me, they didn’t rob me of my nationality, rape and kill my mother and father… Shoot them for what? How am I going to shoot them? Poor little black people, little babies, and children, women. How can I shoot them poor people? Just take me to jail.

This is the courage my dad and his friends saw and loved in Ali. In fact, millions of black people shared that love. This is the courage that transcended his performance in the ring. Ali said the things that had gotten black men before him killed. Yet he lived.And, despite his outright defiance and dark skin, all ethnicities in America loved him. He was, in essence, an American hero. “He showed us all that we can stand up to them. That we could be something more,” my dad told me.

To me, and many other black kids whose daddy’s taught them about the greatest boxer in history, this is the real legacy Muhammed Ali leaves behind. If you went anywhere near social media on the day he passed, however, you would see only one side of the man. Even the likes of Donald Trump chimed in:

On social media, everyone’s tributes about the late, great People’s Champion referenced his quotes, but those quotes only talked about his fights, and his fights alone. Read these pieces and you can see a great man shaping up. An American hero. A great fighter. But what you don’t see is the real Ali.

Quotes about his famous fights don’t mention how he gave black people the confidence to pump up our chests, stand tall, and have pride in our blackness. He gave us the assurance that, if we worked really hard and fought through the struggle, we too could be somebodies. We too could be The Greatest.

To me, the famous quote, “Float like a butterfly, sting like a bee,” meant more than a lesson on how to box. It was also a lesson on how to get by in a world that still sees me nothing but a benign black girl. “Stay on your toes. Do your best work. Stay alert, and when they least expect it, give them all the power you got, little girl,” is what those words say to me.

If, on the day of my hero’s death, social media can just wash his entire legacy away, what does that mean? As I read through the tributes and posts on his quotes, I realized very few mention the real Ali, the one I was raised to know. They don’t mention what he truly did for little budding black identities like mine. Quotes about his famous fights don’t mention how he gave black people the confidence to pump up our chests, stand tall, and have pride in our blackness. He gave us the assurance that, if we worked really hard and fought through the struggle, we too could be somebodies. We too could be The Greatest. His greatness screamed, “I’m black and I’m proud,” and to black people listening, we heard him.

In memorializing just one aspect of Ali’s greatness — the man he was while in the ring — it leaves a hole in his legacy, not just for the little black girl I was, the one listening to her dad and his friends sing Ali’s praises, but for the black community as a whole. It makes me wonder, is our blackness is just as fragile, just as nominal, just as easily erased when we can no longer voice our opposition?

The whitewashing of Ali’s importance to black people covers up his conviction, his faith, and his outright rejection of the laws that that enslaved his black people and vilified his fellow Muslim. It erases the kind of courage my dad spoke of, real courage that made an impact on the history of a suppressed people. All that’s left are his exploits in the ring. Nothing more. When the wash comes out, the real Ali may not be there. And if he’s gone, what becomes of the strides he made to help lift black culture so far away from racial struggle happening in 1967 — the one still happening today, in 2016? Is society telling me to shut up and sit my black ass down, because no one really cares about me or my culture? It can’t be.

I believe a man’s greatness never transcends his race or faith. They are always a part of him. To me and thousands of other black people, who Ali was as a boxer was made better, stronger, more powerful because he was a black fighting not just for a belt, but for a future. I imagine that a man like Ali, who was revered for his social activism, would hate the fact that these are the very things washed away from his legacy. He would be fighting mad and ready for battle. Some of his greatest strides were made outside the ring. So why would we erase them and forget it ever happened?

No. Instead, we should fight harder to keep the legacy whole. If Ali’s fight ended, then ours is just beginning. We should remember the man for who he was, not just who he was as a boxer. He was an activist, an objector, a man who, for faith and culture, would risk his freedoms and wellbeing for what he believed in. He was the man who threw punishing blows in the ring, while being revered by men like my dad and his friends over cold beers and cigars. He’s the man who stood up for black culture when being black was enough to have men killed. The Ali I’ll remember — the real legacy of the man — is the one I met in that dusty garage years ago. And I'll never forget what he fought for.