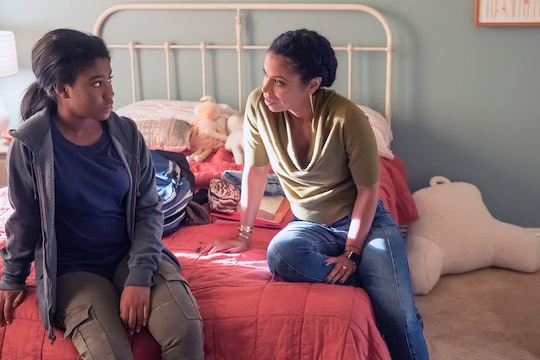 I'll never forget waking up to the sound of pounding on our apartment door. I remember my brother, then 10 years old, asking our mom if he should run. A case worker and police officer were outside, asking my mom where my brother and I were. As someone who'd grown up on welfare and heard stories about foster care, my heart immediately filled with dread. What was going to happen to us? Much like other important, but often unheard stories, This Is Us is now shining light on the foster care system and I can't help but recognize how This Is Us gets foster care right, based on my own personal — and yes painstaking — experience.

From the time I was eight years old until the age of 10, my brother and I were in the foster care system in Cleveland, Ohio. The first of two foster homes was a short-lived stint with distant friends of the family for a few months, until we could be properly placed in an actual foster home in a nearby suburb, where we stayed for another year and a half.

Now, as a parent of a four-year-old son, I feel lucky to give my son a clean home and clothes and make it impossible for him to need anything he doesn’t already have. But that's not how I grew up. The feeling of being the smelly kid in a classroom of already poverty-stricken children or the only seven-year-old to have a cockroach crawl out of my book bag are things that'll stay with me forever and are likely part of what led to my brother and I being placed in foster care. So, watching foster care portrayed on This Is Us has brought back so many of my memories as a foster child and all the heartache that came with it.

In Season 2, Randall and Beth wanted to expand their family. And since Randall had been adopted as an infant, he thought providing for someone like he was provided for would be the perfect way to to honor both Jack, his adoptive father, and the time he later spent with William, his birth father. So as a wealthy family able to support a larger household, they considered adopting an infant child.

In more predictable TV dramas, adopting a child might have worked for the weekly swell of tears the show is known to produce. But for This Is Us, a show unafraid to explore all kinds of family dynamics and situations, the show went a totally different route: the foster system. As Beth noted, if they really wanted to help someone, they should considering fostering a much older child instead, in this case, her name was Deja. She was quiet and seemingly afraid of the new family in front of her, and rightfully so. She was also immediately on the defensive about her mom, and despite all of the neglect and abuse I had gone through as a child, those feelings of wanting to protect your parent who you had been taken away from are eerily accurate.

I can still remember, 20 years later, the feeling of walking into a strange house with a family full of expectant faces, including two parents and a few other foster children who'd already been taken in long before my brother and I had arrived. To me, the house was a symbol of a rich, middle-class family, and was much cleaner than any home I had ever lived in.

But it was still a strange house with a bedroom that would never really feel like my own, and as I stood inside the doorway that first day, I had so many internal questions of how long I would be there, where I was going to sleep, and how long it would be before I got to see my mom again.

A familiar comment that Deja and I both received when being welcomed into our new homes was in regards to personal hygiene. I remember hearing in hushed tones how much my brother, who is two years older than me, and I, smelled. At that point, we had come from a one bedroom apartment where I slept on a foam futon and he slept in the only bedroom while our mom slept on the living room couch. We were poor enough that most of our meals came from the free breakfast and lunch programs at school, so hygiene had never been high on our priority list, nor had it even been properly taught to us.

So when Tess and Annie mentioned that Deja smells bad on This Is Us when she arrived at the Pearson home, it hit close to home for me. Although it might seem like something thrown in there to further drive home the point that she came from a rough home life prior to living with Randall, Beth, Tess, and Annie, it’s also a truth for foster children in general.

I immediately recognized Deja's cowering when Randall came into the room after Beth found the cigarettes in her bag. That is the fear that comes with flinching every time a parent hits you.

My stained clothes were rarely washed, and bathing was an infrequent occurrence. Instead of teaching basic bathing habits, my mom was more focused on alcohol. Keeping my hair clean wasn't a priority, in fact, I had chronic head lice as a kid. Medicated shampoo became a familiar friend of mine until I was able to finally rid myself of the lice.

I immediately recognized Deja's cowering when Randall came into the room after Beth found the cigarettes in her bag. That is the fear that comes with flinching every time a parent hits you. Even now, as an adult, I carry that same instinctual flinching habit with me. If someone around me moves too fast or reaches up to, say, scratch their head or neck, I instinctively flinch, out of habit from the times I was smacked or punched by a parent when I was a child. It has absolutely nothing to do with my friends, family, or husband, but the automatic reflex to defend yourself never really goes away when you grew up in an abusive home.

I remember crying myself to sleep the first few nights I spent in my foster home. For Deja, her emotions manifested in anger and aggression. For me, being confused and away from my mom was frustrating and scary, but I also didn't know how my foster parents would react to any outbursts or bad behavior, so instead I cried in private and hoped that my mom was doing what she was supposed to be doing in order to get us back. But through Deja's anger and aggression, there is that same sadness and confusion that comes for pretty much any foster child with no control over what's happening and no answers about what's coming next.

My mom died when I was a teenager, but I was recently going through the folder she kept while we were in foster care and there’s a sheet that details each Alcoholics Anonymous meeting she went to, with signed signatures to verify them. And for the duration of our time in foster care, there wasn't more than two days that passed between her meetings in her efforts to become sober. And when she was deemed as a fit enough parent to get my brother and I back with her, she never once went back to drinking or even smoking.

For other parents, though, having your children taken away to be placed in foster care isn't enough of a wake up call. I remember our mom telling us in one of our supervised visits that another parent in one of her required parenting classes abruptly stood up, declared that she had a life of her own to get to, and left. A part of me always wonders what happened to her child or children who were in the system, away from her and unsure of what their future held.

My brother and I were two of the lucky ones, whose case was eventually closed and whose mom did everything she was supposed to do to keep our family together. Others aren’t so lucky, which is where patient and loving foster parents come in, much like what Beth and Randall are trying to be on This Is Us. If the story continues to be as realistic as possible, it’s not going to be an easy road, but the ending result will be well worth it.