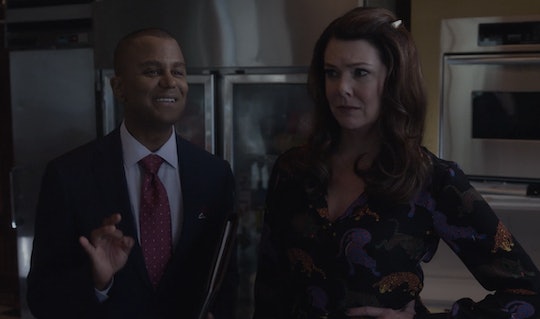 Gilmore Girls: A Year In the Life/Netflix

As A Queer Mom, I Think Michel Is The Best Part of 'Gilmore Girls: A Year In The Life'

(Warning: This post contains spoilers from Gilmore Girls: A Year in the Life.)

In the days following the release of the Netflix reboot Gilmore Girls: A Year In the Life, some fans have said they expected a different outcome for certain beloved characters, which is totally understandable: after all, we've had nearly a decade to concoct possible endings in our heads. There is, however, one glaring and beautiful exception: Michel Gerard, the snotty and (of course) French concierge played by Yanic Truesdale, who is finally revealed to be gay and adopting a child with his husband in the Netflix reboot.

To many other viewers, this may seem like a small detail. Because many Gilmore Girls fans had suspected in the past that Michel was written as a gay man, seeing it confirmed in the reboot might not be seen as a big deal. But my feelings about Michel are different, because to me he represents far more than just a sarcastic sidekick for Lorelai.

As a gay woman who recently became a mother to a beautiful child, seeing Michel Gerard openly married to a man and contemplating fatherhood makes my little queer heart happy. For me, this quiet plotline brings something full circle far more than any four words uttered by Lorelai or Rory ever could.

Media representation of LGBTQ people has evolved considerably over the years. When I was a teenager (which, coincidentally, is also when Rory Gilmore was a teenager), people still thought shows like Will & Grace were edgy, even though in retrospect, many Will & Grace episodes feature remarkably reductive depictions of gay people.

If you did see gay people on TV in the early aughts, these characters were often relegated to sidekick roles, like Stanford Blatch on Sex and the City. They were effeminate men whose mannerisms were played for laughs — or, worst of all, they embodied gay stereotypes, but they were never out. Even Gilmore Girls creator Amy Sherman-Palladino has talked openly about how difficult it was to convince network TV executives to feature gay characters: although she originally intended Sookie to be gay, when Gilmore Girls launched in 2000 network executives wouldn't approve.

As a gay woman who recently became a mother to a beautiful child, seeing Michel Gerard openly married to a man and contemplating fatherhood makes my little queer heart happy.

Even when we did occasionally see well-rounded LGBT characters, marriage and children was almost never in the cards for them. As a young queer person, the lack of gay characters with spouses or children strongly resonated with me; I felt that my desire to be with women was in direct contradiction to my desire to have a family one day. So I spent years forcing myself to date men, in hopes that I would meet one who would give me the family I'd always wanted.

Through the eight-year run of the original series, Michel Gerard kept up a facade of heterosexuality. There is an episode in which he goes out Lorelai, and says in the most cringe-worthy way possible “I love to dance, and the ladies, they love it too.” Later during the scene, he visibly cringes when he encounters a drag queen.

When I rewatched that scene with my wife, she shouted “Oh, come on!” at the screen in exasperation. It was a sad and lonely existence, to be a “confirmed bachelor” who has to pretend to be afraid of drag queens, but it’s the best one we ever got for Michel — until now.

Over the years, I slowly came to the realization that my sexual orientation wasn’t something I could hide. I finally came out to my loved ones, and I tried to build the life that I wanted. I’d always wanted to be a mother, so once I accepted that pretending to be straight wouldn’t be the way that happened for me, I looked into my other options. At that point, Gilmore Girls was off the air, but I liked to imagine that Michel Gerard was just off-camera, finding himself and his own path, as well.

As it turned out, my dreams for Michel came true. In this new series, Michel is happily married to a man named Frederick. It's a minor detail in the series — there's no dramatic flashback to his coming-out, nor is there any mention of what flowers were at this wedding — but I almost liked it better that way. In my imagination, when Michel told his friends and family that he was gay, they were relieved and happy for him.

From the other side of gay parenthood, with my toddler on my lap, I say, "Welcome, Michel Gerard!”

In the Netflix reboot, Michel is married, and his husband is pushing for children. True to form, at first he seems less than enthused about the possibility, but because Michel often uses sarcasm as a way to cover up his true feelings, it's tough to say how he really feels about it. All we know is that, as the series progresses, he goes along with Frederick’s plans, eventually saying, “I think Frederick ordered [a baby] or something.”

From the other side of gay parenthood, with my toddler on my lap, I say, "Welcome, Michel Gerard!” Gay people like myself and Michel are allowed to have futures now. We can have weddings and children (or not have those things if we don’t want them!) and thanks to groundbreaking shows like Modern Family and The Fosters, we're able do it on television.

From the other side of gay parenthood, with my toddler on my lap, I say, "Welcome, Michel Gerard!” And I’m so excited to live a world where Michel Gerard and myself get to be out homosexuals, pursuing whatever version of family makes the most sense to us.