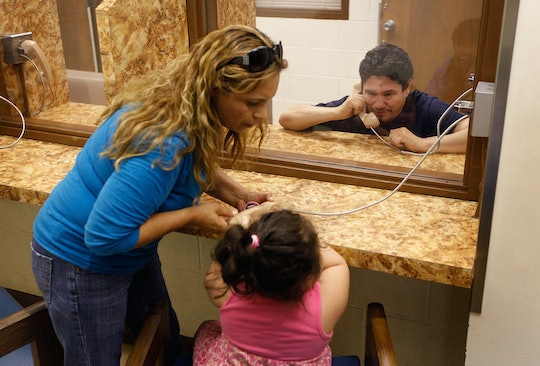 As ICE's Reign Of Terror Mounts, These Families Across The U.S. Are Springing Into Action

Thirty-nine Google users have taken the time to leave a review of El Paso Processing Center on the internet (Virginia Chavez’s one-star rating: “We went yesterday evening to visit a relative who is detained there we were treated with no respect.” Ryan Arnold, who gave a five-star rating: “Best service, around the clock help. Can't beat it.”). A dozen other people have posted questions to the center’s Google page, looking for missing relatives feared detained there. The detention center is located on the border between Texas and the state of Chihuahua, Mexico — the epicenter of the immigration crisis in the public imagination. Two thousand, two hundred miles away in the Northeast U.S., however, Rachelle* also lives in fear of being deported.

“I am worry[ing] for my daughters. [My daughter] is so sad and [at the] same time crying. Now [I worry] more because I am single mother this is why I worry for my daughter,” Rachelle tells Romper by phone. Rachelle came to the United States in 2006 on a visa that she overstayed, and is now in fear of being deported, which would leave her two daughters — one age 7 and the other age 11 — without their mother.

Two years ago, Rachelle’s brother was deported to Guatemala after several months in detention, sparking fear in the single mother for what the Trump administration might do. Worried that she will be targeted during the latest wave of raids by the Immigration and Customs Enforcement agency — ICE — she calls her sister, Adriana* several times a day for reassurance. Adriana is an American citizen living in California.

“She always [thinking] about what is gonna happen to her children, if something happen and of course she is really worried about her daughters, but I give her a positive word that I'm here to help if something happen,” Adriana tells Romper. Should Rachelle be targeted, Adriana has promised to cross the country to take care of her two nieces.

Communities across the country have banded together in recent weeks as the Trump Administration ordered ICE to increase raids of immigrant homes in search of those who are undocumented, as The Atlantic reported. Protests, social media efforts, and promises made between friends and family demonstrate how complicated the issue of “immigration” is for many Americans, with many residents having built lives in the U.S., working here and raising U.S. children for years, and many U.S. citizens confronting their complicity in immigration policies deemed “inhumane” by the American Civil Liberties Union.

Rachelle and Adriana’s situation is not unique. Their scenario mirrors that of thousands upon thousands of families across the country. And with the Trump administration cracking down on immigration in more severe, hostile ways, those facing deportation are often placed in incredibly frightening situations on a daily basis. To be a human in a country that has sought to dehumanize you and relinquish your rights is to show bravery and courage in getting in a car, attending an ICE check-in, going to work, or catching a Greyhound bus.

One of the consequences of a fresh age of fear has been an uptick in local support and backing for migrants in the U.S. Informally, people like Karen* have offered rides to undocumented people in their towns afraid of being pulled over. "It takes months for hearing and takes time to be deported," Karen explains. "So they wait outside a deli near their home for someone to pick them up so they can do a day's work and get paid."

Those with driver's licenses recently learned that ICE has used facial recognition technology to scan records of millions of motorists photos, as the New York Times reported in early July. Karen has taken turns with neighbors carpooling undocumented members of their community around. "If they do have a family member who has a car they will take a ride at the risk that person will get stopped as well," she says.

Beyond citizen action, many organizations offer formal ways for people to help those at risk of deportation. Founded in 2007, New Sanctuary Coalition serves to bring together volunteers who stand in solidarity with families and communities in New York City who are facing deportation. The organization seeks to remind individuals that immigration reform was an issue before President Trump came into power, and will continue to be a pressing topic long after he is out of office. Its most popular way of doing so is through its “accompaniment training” program, in which volunteers can attend a two-hour session where they are educated and trained in the best way to support families facing deportation: by showing up.

We quickly jump into untangling the idea that this is a partisan issue or that this is a new issue, that this came out of our new administration, which is often something that our more privileged volunteers may be coming to training thinking.

“One of the things that I think makes New Sanctuary so powerful is that all of the techniques that we use are really grounded in the belief that no one should be deported, and that starting point is a learning curve for some people, and it’s an on-going learning curve for people as they go through the program… and are challenged over and over again to broaden their understanding,” says Carol Scott, an accompaniment volunteer leader with New Sanctuary Coalition.

Throughout the month of July, the organization is holding trainings throughout the New York area. The timing couldn’t be more appropriate: In just recent days, situations with ICE has escalated greatly. ICE has even begun fining some immigrants thousands of dollars for allegedly not complying with regulations. It’s a terrifying situation, especially for immigrant families who fear of being separated from their children, a hot topic that’s plagued the immigration process over the past two years. Back in March, it was reported by CNN that 471 parents had been deported from the United States without their children, their families torn apart. The uncertainty is often the scariest part for these families. New Sanctuary Coalition wants to remind them of how strong they really are.

“Accompaniment is different than regular activism because the thing you have to learn the most is the three rules: Respect, no judgement and do no harm,” says Joan Racho-Jansen, another volunteer leader. “The more you do [to assist], the more you see how despicable this system is. It’s not only broken, it’s terrible.”

The two-hour-long training program first takes volunteers through a history of immigration reform in the United States, explaining to them that the issue dates far before President Trump even ran for office. “We quickly jump into untangling the idea that this is a partisan issue or that this is a new issue, that this came out of our new administration, which is often something that our more privileged volunteers may be coming to training thinking,” says Ambien Mitchell, accompaniment coordinator.

The program then walks volunteers through what it means to accompany a family or individual: They are there to solely offer support and backing, and to make them feel more comfortable in often scary situations. Volunteers are to do nothing that could reflect poorly on the individual facing deportation and are instructed to respect everyone, from the judge to the ICE officers. “You have to have absolute respect for them… You have to respect their space,” says Racho-Jansen. “Our behavior doesn't reflect back on the people were accompanying.”

From the many times she’s accompanied families, Racho-Jansen has seen that being there in support creates a sense of community, which often plays in favor of the one they’re supporting. She recalls officials being kinder because of their presence, and likewise judges. The impact is clear: New Sanctuary is creating silent yet powerful activists.

People who are citizens and can be in ICE buildings without fear or without repercussion have an incredible privilege that they can loan to or offer to the presence of people who are there who are incredibly vulnerable.

“When you are on an accompaniment that truly centers on the leadership of our friends, it is truly magical. It is transcendent. It is so amazing to understand what our friends are capable of with our support,” says Mitchell.

The training program also pushes volunteers to examine their own privilege, which is vital to being a good accompaniment.

“This is not your experience,” Mitchell says. “Our friends have been through more than you can imagine. Anything you can suggest, they have probably thought of and tried already.”

Scott echoes Mitchell. “People are challenged to fully embrace supporting the impacted community from behind with your presence, as opposed to leading from the front with your intellect and your words. People who are citizens and can be in ICE buildings without fear or without repercussion have an incredible privilege that they can loan to or offer to the presence of people who are there who are incredibly vulnerable.”

Through their efforts, they are able to offer support to individuals facing deportation, including families and minors who are terrified of the unknown. The work the organization has done has not only impacted the community, but also the many volunteers who have taken the program and been able to accompany many in recent months.

Mitchell adds, “When we have done our job... to make sure exactly what their rights are… the results are incredible.”

Elsewhere, Brooklyn parent and writer Sara Nolan is part of an organization that helps provide people going through asylum applications with secure housing and supplies. Immigrant Families Together provides "medical (and trauma) care through their asylum hearings, which can take a very long time," Nolan explains by email, using donations from across the country to support families at risk by paying bond to get out of detention (a recent case required $15,000 to secure bond), among other things.

"Also, let us not forget compassion and companionship."

As detention remains ongoing, families across the U.S. are doing what they can to believe in what Rachelle terms her “dream” of a better life here.

“For my sister — she is a single mom — and [it breaks] my heart because she is working so hard for her two daughters and now this president is doing all this, it's really sad,” says Adriana, “but we believe in God and [are praying that] something bad [doesn’t] happen to them.”

*Names have been changed to protect identities.

Caption for photo at top of page: BROADVIEW, IL - MAY 25: Guillermo Campos-Ojeda says goodbye to his wife Adela and daughter Paloma before boarding a deportation flight chartered by U.S. Immigration and Customs Enforcement (ICE) May 25, 2010 in Broadview, Illinois. The undocumented immigrants scheduled to take the flight began the morning at the ICE processing center in suburban Chicago before flying to Harlingen, Texas where they were then bussed to Brownsville and finally walked to the Mexican border and released from custody. The U.S. deports over 350,000 immigrants a year for entering the country illegally, most are Mexican, and more than 90 percent are men. (Photo by Scott Olson/Getty Images)