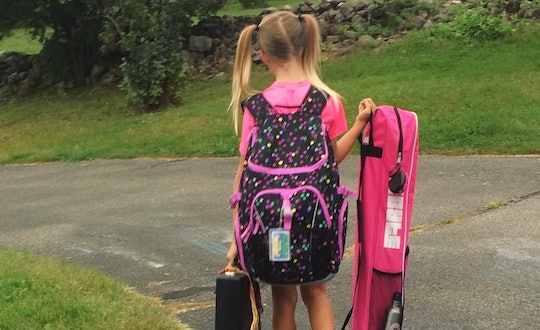 As The Parent Of A Transgender Kid, Here's What I Want You To Know

Every year, school is something I worry about. I know all parents worry about sending their kids to school. Will their teacher be the right fit? Will they have good friends? Will I survive packing their lunch for the next 180 days? As a parent of a transgender kid, there are other concerns.

I opened the school’s new parent portal website to fill out my kids’ forms for the school year, and there it was. My daughter’s old, dead name. For a moment, I couldn’t breathe. I looked around the coffee shop where I was sitting. Could anyone else see? I felt exposed with the name I chose nearly 12 years ago staring back at me. Where did they get it? She’d never used it at that school. It’s been legally changed for over two years now. What if she saw it? What if someone else saw it? Where else is it hiding in the school’s system?

My daughter is 11 years old, and she’s been living as the girl she knows herself to be for three years, secure in her name. But I still worry — about safe access to the right bathrooms and locker rooms. I hold my breath every time someone new finds out my kid is transgender. I worry about bullying from her peers, but even more so their parents. I follow Board of Education meetings wondering each month if this will be the time my daughter becomes the subject of public comment. When teacher assignments are released, you can find me diving deep on the internet for hints that her teachers might be ones that support her or at the least don’t vehemently oppose her very identity. I wish I could talk to every teacher and every parent. I wish I could make sure they knew more about what it means to be transgender than whatever sensationalist headline they last read. I wish I could share just a little of what our family has learned on this journey.

Her gender identity is not a secret, but it’s her story to share as she sees fit.

Transgender kids are just like other kids. My daughter is a pretty typical 11-year-old. She loves hanging out with friends, dancing, and playing field hockey. She’s a great student with a big heart and more sass than any of us can handle. Being transgender is just one part of her. At the same time, transgender kids are different. They’ve wrestled with and articulated their identities in a way that most adults I know haven’t. They know that the world can be a damn scary place for kids like them. More often than not, they are wise beyond their years, at the same time boldly self-confident and deeply self-conscious, as they navigate being themselves in a world that would rather they weren’t. Transgender isn’t a dirty word. It doesn’t need to be whispered in hushed tones. It has nothing to do with sex. When you act like the word “transgender” is scandalous, you’re acting like my child is scandalous. She was born this way, and she deserves to be seen, valued, and celebrated for who she is, like every other kid. At the same time, don’t out my child. Her gender identity is not a secret, but it’s her story to share as she sees fit. Period.

You may not always get this whole transgender thing, and that’s OK. You don’t have to fully understand what it’s like to be transgender to be supportive and empathetic. Use the names and pronouns kids ask you to use. Listen to them when they tell you who they are; it is never up to you to convince them otherwise. Sometimes other adults won’t get it, and that’s somewhere you can help. Share what you’ve learned from my kid or others. Offer stories and resources. Some people will aggressively not get it and say stupid things. That’s not OK, and it’s up to you to stop it. Our kids are counting on you.

We’ve received hate mail, death threats, and been reported for child abuse because we support and publicly advocate for transgender youth.

When you’re the parent of a transgender child, everyone wants to tell you about what a safe and welcoming place the world is now. We are thankful everyday for the progress that’s been made, but in our political landscape transgender kids and their families are increasingly vulnerable to hate and violence. We’ve received hate mail, death threats, and been reported for child abuse because we support and publicly advocate for transgender youth.

Sitting in that coffee shop, I took a deep breath and sent a quick email to our district’s technology director. I have his contact information at the ready along with that of the school counselor, principal, superintendent and at least two Board of Education members. That’s life as the parent of a transgender kid.

The difference between us and so many other families is that, before long, I got an email back. The district understood how important this was and would resolve it quickly. Not every student is so lucky. For that I am both grateful and more determined than ever to change this world for families like mine. Will you help me?

More Like This
This Underwear-Clad Mom Saved Her Pet Goose From An Eagle While Breastfeeding
At The Mom 2.0 Summit, Reconnecting & Refocusing Took Center Stage
My Nanny Showed Me How To Be A Mother
Ashley Graham On The “Fun, Organized Chaos” Of Raising Twins