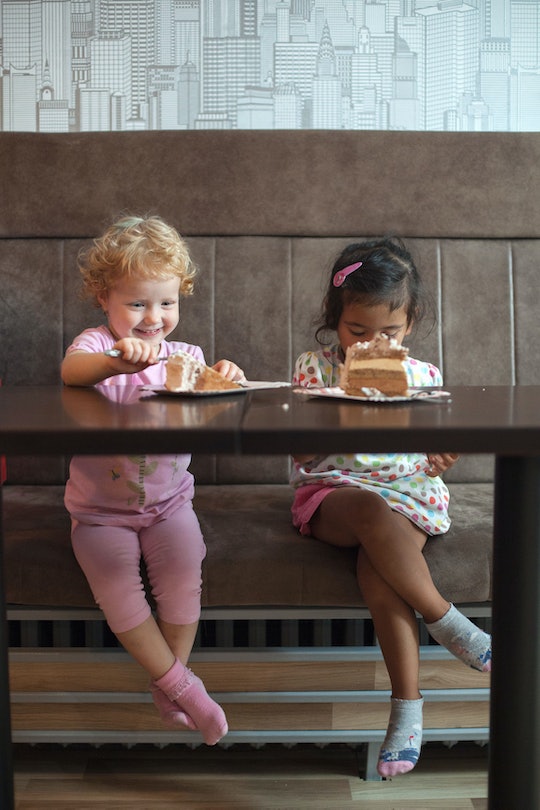 The Importance Of Keeping Your Kids Away From Diet Culture, According To Experts

Last week, WW (formerly Weight Watchers), the diet program famous for its “calories in, calories out” approach to weight loss, launched Kurbo. The weight loss app is designed to teach kids as young as eight how to count their calories and evaluate their food choices with a handy traffic light chart. The public response to Kurbo was swift and predictable, with Twitter delivering the nearly unanimous verdict that kids don’t need diets, and they certainly don’t need a Fortune 500 company with a vested interest in the persistence of diet culture influencing children's relationships with food.

The Good Place actress and activist Jameela Jamil directed her nearly one million followers to a Change.org petition requesting that WW remove Kurbo from their program. As of August 20, the petition had nearly 82,000 signatures, not to mention the plethora of similar petitions circulating.

While the outrage seems almost universal, Kurbo doesn’t appear to be going anywhere and WW is not reticent about the app’s purpose. The app store description of Kurbo states that the app is for “kids, teens, and families who want to improve nutrition habits and lose weight.”

WW knows their market. The CDC reports that around 13.7 million children and adolescents in the United States fall into the “obese” category. And while activists and Twitter heroes can rail against corporate-sponsored eating disorders, obesity increases an individual’s risk for high blood pressure, heart disease, and diabetes II, and who wants that for their child? Besides, as an app store blurb states in Kurbo’s description, the app can also help kids “look better.”

To understand what seems like a cultural case of cognitive dissonance, decrying diet culture for our children while also supporting the $60-billion-a-year diet industry that has recently recognized children as an untapped market, Romper sat down with certified nutrition support specialist, "non-diet" registered dietitian, and intuitive eating coach, Laura Iu, owner of Nourish New York. “When I imagine an 8-year-old logging an ice cream or a milkshake in the app, it breaks my heart," Iu tells Romper.

This will teach kids to become obsessed with food and will distort their natural ability to self-regulate.

The picture she paints is both upsetting and an accurate description of the app’s purpose, but as Iu points out, the app’s functions aren’t just antithetical to our ideas of a carefree childhood, they are also very real health risks that come from teaching children these behaviors. As Iu explains, “This will teach kids to become obsessed with food and will distort their natural ability to self-regulate.”

In her years as an eating disorder specialist, Iu has seen that childhood diets are a common part of her patients' origin stories. “Whenever parents, through their best intentions, are involved in their kid’s weight loss, whether it was Weight Watchers or even taking them to a dietitian, it always, always backfires.”

Research supports this. In 2015, the American Academy of Pediatrics published a study that linked teaching children dieting behaviors to later disordered relationships with food and subsequent health issues. The AAP officially recommended that children be taught “a whole diet approach” to eating without restriction.

That research was published in 2015, and four years later WW still launched Kurbo and many people will still buy the app. Because the problem goes deeper than facts and figures and springs from the stigma attached to living in larger bodies.

In Iu’s view, “People are so fixated on weight, that they are not diving into the research that shows that harmful side effects of dieting, or they are choosing to ignore it.” As such, the launch of Kurbo underscores a lot of problematic social attitudes towards food, weight, and health. “Fat-phobia is deeply embedded in society. It's in the medical field, how we talk day to day, in our social media interactions, and in our advertisements.”

This brings Iu back to those troublesome obesity statistics and one of her biggest issues with WW’s new app, “It’s completely normal for kids to have periods of time where they gain weight more quickly, particularly in the years before they hit puberty, which is right around the age range the app is geared towards.”

People can be healthy in larger bodies. If their lab work is great, they're happy, and they are learning how to nourish themselves who is to say they are unhealthy?

Iu explains, “Because society demonizes any type of weight gain, many parents aren’t aware that for females its absolutely necessary that they put on body fat, a minimum of 15%, in order to get their period.” According to Iu, the idea that weight is a direct indication of health is a vast oversimplification. “People can be healthy in larger bodies. If their lab work is great, they're happy, and they are learning how to nourish themselves who is to say they are unhealthy? Diseases affect people of all shapes and sizes. Thinner bodies are not immune to these diseases.”

Rachel Cannon is a therapist and program manager at a private in-patient eating disorder treatment facility in California, and she echoes Iu’s concerns. Cannon finds the traffic-light food-categorization component to Kurbo (with red-light, green-light, and yellow-light foods) particularly troublesome. “This attaches morality to food, and a personal value to weight loss.”

Cannon has seen how the superiority society has attached to weight loss and thinness can create nonsense motivations with troubling results. “I have had patients who have been taught to restrict and even encouraged to purge by their parents to maintain a body standard because of how it reflects on the family’s image.”

The morality Cannon describes, the deep-seated belief that thinness is the physical evidence of success, happiness, and goodness has turned “obesity” into the villain and pushed the very real threat of eating disorders out of the picture.

But eating disorders, as Cannon has seen, often begin very young. “We had to institute an age minimum because we had families bringing in children younger than 12 with severe eating disorders.”

And eating disorders, from the mild to the severe, are much more devastating and dangerous for children than having larger bodies. The National Institute for Mental Health reports that eating disorders have the highest mortality rate of any mental health disorder. Statistics show that 10% of individuals suffering from anorexia nervosa will die from it.

Beyond the physical toll that restriction, binging, purging, and starvation puts the human body through, there is a mental toll as well. Cannon describes the emotional costs she sees her patients paying every day. “Living with an eating disorder is very isolating. It diminishes social interaction. Attending events that focus on food is terribly uncomfortable. There is constant shame and anxiety, as people with eating disorders tend to feel unworthy of good things.”

There is also a secretive aspect to eating disorders that intensifies these feelings of isolation. Cannon describes how often individuals with eating disorders feel the need to hide their disordered behaviors. But, as Cannon explains, “It goes beyond calories or food, and becomes about feeling unlovable and trying to compensate for these feelings through food behaviors.”

The physical and emotional impact of eating disorders must be taken seriously, because no matter how we interpret cultural concerns over our children’s weight — whether it’s about their health or how they will be affected by the stigma attached to larger bodies—there is no question that for most parents, it really comes down to wanting our children to live full lives with the confidence that comes from knowing just how deeply they are loved. Misguided as it is, WWs launch of Kurbo underlines this by showing how deeply invested parents are in giving their kids this life.

There are other ways to help our children have the health and confidence that we want for them. According to Iu, it all comes down to the examples we set as parents. “Teaching kids about health means role modeling positive body-image talk and positive food behaviors, allowing all foods to be around and not creating rigid food rules, teaching them to trust their bodies, and letting your child know they are enough just as they are.”

While her advice is accessible, it can also feel impossible. The average American lifestyle is increasingly sedentary and with diet culture complicating our understanding of our own food choices, trusting our bodies to lead a healthy lifestyle and teaching our children to trust their own, can be overwhelming.

Sometimes we eat for the nutrients, other times it’s because we have a craving or a big feeling. Sometimes we eat just because it’s time to eat. These reasons are all valid.

Cannon’s work really comes down to teaching her patients to shed these complicated ideas about diet and exercise, “Real holistic health is about balance. It means getting some form of meaningful movement or change of environment. For many kids, this means playing outside, for families where that isn’t an option that could look like P.E. class or just playing in their rooms. With food, that looks like intuitive eating and recognizing that sometimes we eat for the nutrients, other times it’s because we have a craving or a big feeling. Sometimes we eat just because it’s time to eat. These reasons are all valid.”

So how should tech handle demand for wellness products in the pediatric space? Fitbit, the activity tracking wristband company dedicated to getting people moving, has their own device for children: the Fitbit Ace 2 Activity Tracker.

FitbitMarketing manager Emily Johnson tells Romper that the Fitbit Ace 2 was designed in response to consumer demand and in accordance with the research of Dr. Ryan Rhodes, an expert in exercise psychology. An important part of the Fitbit Ace 2's design is that it eliminates weight-loss goals from the joy of activity entirely. Unlike the adult Fitbit, the Ace 2 does not track calories burned or weight, and instead keeps the focus on playful movement and centers family interaction. There are also parental controls that allow parents to personalize their children’s activity goals and what data they are able to access.

Weight stigma permeates our society to the point of suffocation, and it can feel difficult not to respond with panic. But panic only breeds more panic, which means disordered relationships with food and poor health for generations. And that’s not what we want for our kids. Especially when the better solution is so much more pleasant: trusting ourselves, trusting our kids, and having fun.

More Like This
My Family Lives Between Cultures. Cooking For My Daughter Grounds Us.
My Parents Never Taught Me To Cook So I'd Always Need Them
Meal Prep Sucks The Fun Out Of Food
Moms, Just Eat The Fruit Dammit