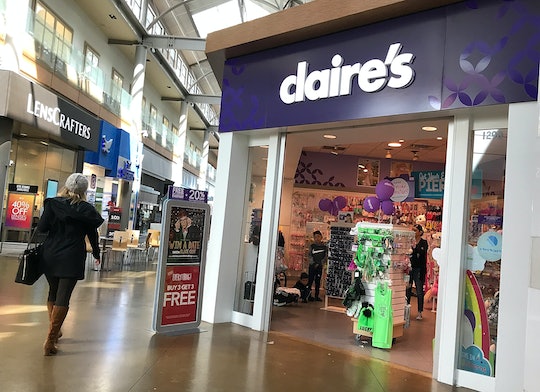 You may not wander shopping malls with the same carefree attitude that you did in your younger years, but many of the old stalwart stores remain. And that means that, in some cases, your kids may now be browsing in the same stores you used to. But breaking news from the Food and Drug Administration involves concerns about a retail chain at which you may have your childhood memories, such as your ears getting pierced — and where your kids might shop. As CNN reported, asbestos found in some Claire's cosmetics products, the FDA warned... and here's what parents need to know.

The FDA's statement, which was released on Tuesday, warns parents regarding Claire’s cosmetics for their kids after some of the store’s merchandise allegedly tested positive for asbestos content, the Chicago Tribune reported.

The FDA first had such concerns in 2017, according to Jezebel, resulting in the recall of some products and an FDA decision to monitor the market in general for cosmetics products that could be a hazard to public health. (The Justice brand was also involved in this concern, according to the FDA statement.)

As Fox News added, after the 2017 scare, even though Claire's and Justice withdrew products from shelves, the FDA started to do independent testing. The outlet confirmed that Claire’s had filed for bankruptcy in March 2018. (The company's website noted that its financial restructuring is complete.)

The Chicago Tribune added that Claire's has hit back at the FDA's announcement, noting the findings included "significant errors."

"At Claire’s, customer safety is paramount," the company told Romper in a prepared statement in response to the FDA bulletin.

"We wish to address today's FDA warning that three cosmetic items sold by Claire’s may have been contaminated with asbestos," Claire's tweeted, attaching a statement to the post.

"Out of an abundance of caution, we have removed the three products identified by the FDA from our stores ... There is no evidence that any products sold by Claire’s are unsafe ... We are disappointed that the FDA has taken this step, and we will continue to work with them to demonstrate the safety of our products."

People added, however, that the FDA's position is that Claire's has not been listening to the FDA's requests and, without being able to mandate an official recall just yet, the safety agency took the extra step of broadcasting an official warning that young customers should avoid these products.

Parents should be on the lookout for toys and accessories for their kids that are made with nontoxic materials, and are free of lead paint or other such materials, Kids Health noted.

Parents should read labels carefully, and be mindful of old toys and accessories that are hand-me-downs for which there are not clear safety guidelines or instructions.

And while this sounds logical, of course, such news is scary. Because as a parent, who among us hasn't broken down and bought our kids, on impulse, something cute from the mall that didn't go through our usual safety and preferred-brand checklist?

For example, my youngest daughter loves lip glosses and lip balms of all stripes, and I try to stick with organic companies when she is begging for another. But sometimes I get her a fun one from a novelty store. How do you not worry?

As Jezebel explained, asbestos is a mineral that is often associated with talc, a common component of makeup. Talc can also be a carcinogen, so it must be purified before it can be used by consumers without concern.

Boston's CBS 4 News added that the FDA has also announced it’s starting a voluntary registry for cosmetic companies to list their products ingredients, such as talc. Jezebel noted that the FDA has no information that anyone has gotten sick as a result of exposure to Claire’s products.

That's certainly a good thing. But as a parent, it's a good reminder that the burden is on me to research everything I buy ultra-carefully.