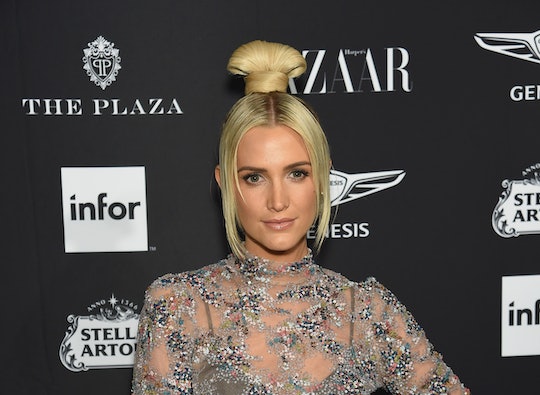 Ashlee Simpson Opens Up About Co-Parenting With Ex Pete Wentz

Raising a child with a former partner can be tough, but luckily, Ashlee Simpson and her former partner have been able to make it work. In a recent interview with Us Weekly, Ashlee Simpson talked co-parenting with Pete Wentzher, her ex, and revealed that their 9-year-old son, Bronx, hit the jackpot when it comes to divorced parents. Simpson said that she and the Fallout Boy member — as well as her current husband, Evan Ross, and Wentz' girlfriend Meagan Camper — all get along great. "I think we really lucked out," Simpson said. "I mean, they're wonderful."

Ross concurred, saying "I think it could go all different kinds of ways," while discussing splitting parenting duties between four people. "I think the fact that there is a lot of respect amongst all of us, that it makes it easy. And we're all really close friends, and it's easy, it's nice. We got really lucky with that." In addition to Bronx, Simpson and Evan share a 3-year-old daughter, Jagger, and Wentz and Camper have a 4-year-old son, Saint, and a newborn daughter named Marvel. And if Simpson and Ross have their way, Bronx will have even more siblings in the future.

Simpson and Wentz first met at the MTV Video Music Awards in 2006. Their April 2008 engagement sparked pregnancy rumors, according to MTV news, and shortly after their wedding the following month the couple finally confessed that they were, indeed, expecting. "While many have speculated about this," the couple said in a joint statement, "we wanted to wait until after the first trimester to officially confirm that we are expecting our first child. This is truly the most joyous time in our lives, and we are excited to share the happy news and start our family." Bronx Mowgli was born in November 2008, and Simpson filed for divorce in February 2011, citing irreconcilable differences.

In the summer of 2013, Simpson began dating Ross, the son of legendary singer Diana Ross and half-brother of Tracee Ellis Ross, best known for her starring roles on Girlfriends and black-ish. The two married at Diana's Connecticut estate one year later, and welcomed their first child together a year after that. Speaking to Entertainment Tonight just before Jagger's third birthday earlier this year, Ross said, "She changed my life; it's been amazing." Both Simpson and Ross want more kids, but just how many is still up in the air. "Definitely more kids in the future," Simpson said. "Well, a kid. Another kid." Ross then clarified, "I want five more, she said one more." One it is!

The real question now is when they'll find the time to conceive and raise another child, because the family is currently busy with several projects. They're set to release a duet album of love songs this fall, and they're cross-promoting it every which way they can. The couple designed a capsule collection of unisex clothing named after their daughter, which came out in May. The pieces features lyrics from their upcoming album ("it has a lot of stuff to do with love and the idea of love," Simpson told Women's Wear Daily).

They pair is also starring in an E! reality series, Ashlee+Evan, airing in the coveted post-Kardashian time slot. Originally conceived as a one-off documentary covering the couple's work on their album, it was eventually picked up for a full season, echoing the 2003-2005 series Newlyweds: Nick and Jessica, which starred Simpson's sister. Judging by the first episode, the siblings have a lot in common; while the elder is best known for confusing poultry and seafood, the younger one made a similar gaffe in Sunday night's premiere, referring to faux fur as "fox fur."

And, of course, when the couple isn't busy advancing their careers they're occupied with the various responsibilities of parenting and co-parenting. Thankfully, they're handling that part of their lives like bosses, too.