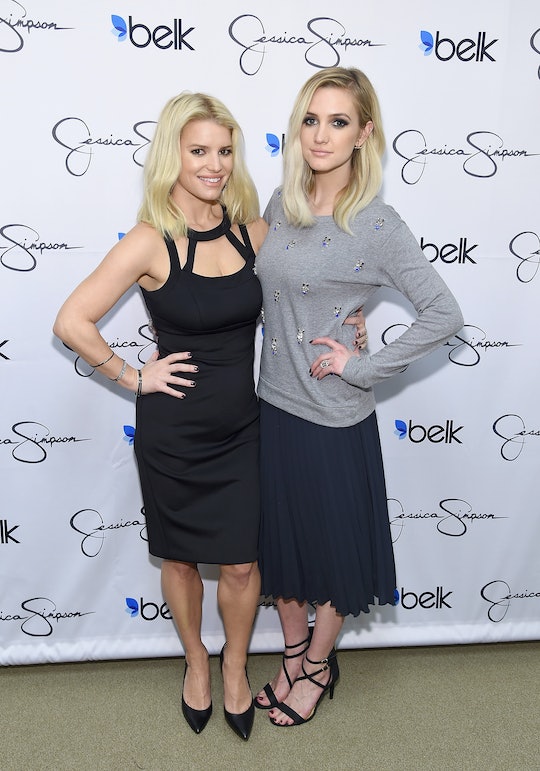 The Simpson family just got a little bigger. Jessica Simpson welcomed her third child, Birdie Mae, earlier this week and fans are eagerly awaiting more news about the baby girl and her mom, and they finally know thanks to Ashlee Simpson's update on how Jessica is doing after giving birth. The 34-year-old songstress gushed to Daily Pop about her new niece, whom she referred to as "Little Birdie."

During an appearance on the show, Ashlee said Birdie is "so cute," adding that she has "adorable cheeks." Jessica, 38, is also doing well, the Ashlee + Evan star told Daily Pop. She said mom and baby are doing "amazing" and "so great," and siblings Maxwell, 6, and Ace, 5, are loving their baby sister.

"The kids were so cute — Jessica's kids with their little baby sister," the "Boyfriend" singer told Daily Pop.

Jessica and her hubby, Eric Johnson, 39, announced the arrival of their third child on March 20, according to Us Weekly. The Dukes of Hazzard star posted a picture of Maxwell holding her baby sister's hand, writing in the caption, "Birdie Mae Johnson." She revealed that her daughter weighed in at "10 Pounds 13 Ounces" when she was born the day prior. Tina Simpson, Jessica's mom, shared a warm welcome message for her daughter and latest granddaughter in the comments on the post.

"Our beautiful blessing Birdie Mae welcome to the tribe!," she wrote. "We love more than all the moon and stars in the heavens!!!!!"

Jessica announced her pregnancy in September, revealing on Instagram, "This little baby girl will make us a family of five." She added that she and Johnson "couldn't be happier to announce this precious blessing of life." She continued to document her pregnancy progress on Instagram throughout, even sharing a bikini selfie shortly before Birdie arrived.

Ashlee revealed on the show that she has the itch to have more kids after meeting Jessica's new addition. She told Daily Pop that she's not currently pregnant, but "definitely" thought about the possibility of expanding her family after Birdie made her entrance into the world.

"I'm not pregnant, but it definitely gave me the fever a little bit," Ashlee said.

Ashlee and husband Evan Ross currently have one child together, as well as the pop star's son from a previous relationship. Jagger is 3 years old, while Ashlee's other son Bronx, whom she shares with ex-husband Pete Wentz, is 10, as per Us Weekly. Ross is on board with Ashlee's plans to have another baby. He previously appeared on The Raw Word with Claudia Jordan where he said he "definitely" wanted at least one more child.

"I'd love more kids. We're definitely having another one," the 33-year-old said. Ashlee agreed, telling Jordan, "I want to finish this album and then definitely, for sure," per another E! Online article.

"Definitely one more, and then we'll see what happens after that," Ashlee said.

Ashlee hasn't provided any more information about the progress of her album, though she did release a joint EP with her husband to much acclaim. Fans are hopeful and excited about the "Phases" singers teaming up again, perhaps for a full-length album this time, along with the possibility that the Simpson family could once again be expanding with a new baby.

Congratulations to Jessica, as well as her entire family. I, for one, can't wait to see more photos of baby Birdie as she grows with her siblings.