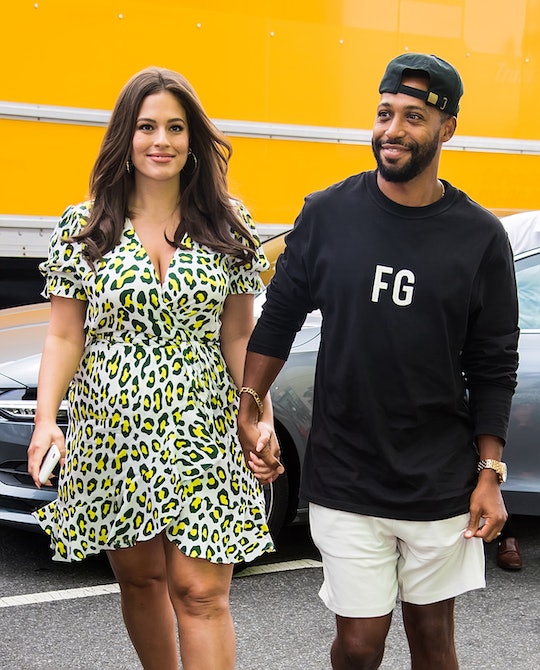 Congratulations are in order for one happy family. Ashley Graham announced she's welcomed her first child, a baby boy, with her husband Justin Ervin on Saturday, sharing the exciting news on her Instagram Story. While the new parents haven't shared a photo or revealed their bundle of joy's name just yet, Graham said their "lives changed for the better" over the weekend.

"At 6:00 p.m. on Saturday our lives changed for the better," the new mom wrote on her Instagram Story on Monday. "Thank you for all your love and support during this incredible time."

Graham announced first announced her pregnancy back in August, sharing the news in a touching Instagram video. “Nine years ago today, I married the love of my life,” she said at the time. “It has been the best journey with my favorite person in the world! Today, we are feeling so blessed, grateful and excited to celebrate with our GROWING FAMILY! Happy anniversary, @mrjustinervin. Life is about to get even better.”

Three months later, she announced on The Ellen DeGeneres Show that she and Ervin were expecting a little boy. Her pregnancy has been full of transparency and celebration, so it is only fitting that she would announce the birth so soon after their little guy made his arrival.

During her pregnancy, Graham not only maintained her modeling career but thrived in it. Perhaps most notably, she was on the cover of one of Vogue's January motherhood issues — along with other famous moms including Cardi B, Stella McCartney and Greta Gerwig. But Graham also walked countless red carpets while expecting, even appearing in Zendaya and Tommy Hilfiger's New York Fashion Week show in September.

"Tommy told me I was the first pregnant woman who’d ever walked his runway. It was kind of like a block party in Harlem, all kinds of women, all genders, races, and everybody’s heels were so high," she told Vogue for her cover. "I was praying I wasn’t going to fall down. Which is an awful lot to ask of a model in her second trimester — I have wounds on my feet!"

Along with showcasing her serious professional skills, Graham's continued modeling helped to normalize the pregnant body, as well as teach her to love her own changing shape. She wrote in an Instagram video that showed her belly without a shirt on, "Getting bigger and bigger and trying to embrace my new body everyday. It’s a journey and I’m so thankful to have such a supportive community."

That community and sense of self confidence will serve Graham well as she and Ervin navigate the difficulties of early parenthood. Congratulations to the happy family!