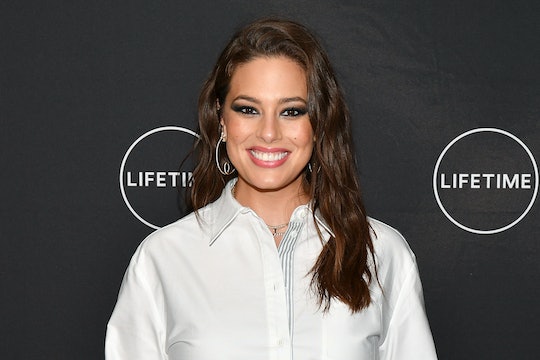 Ashley Graham Will Be A Highly Intuitive Parent, According To Her Zodiac Sign

Supermodel Ashley Graham is about to embark on her parenting journey sometime late this year or early 2020, with the mama-to-be first announcing her pregnancy on Aug. 14. And fans already know she's fierce when it comes to her messages of body positivity and is always true to herself when choosing gigs, but what kind of mom will she be? Ashley Graham's zodiac sign might be a window into her future parenting style.

With a birthday of Oct. 30, 1987, Graham is a Scorpio, or more specifically a Scorpio on the cusp of Libra, according to AstroCharts. But before I dive deep into what all of this means, I'll first prove that motherhood was always in the stars for Graham.

In case you didn't know already, Scorpios are naturally creative and social beings, according to The Secret of the Tarot. So, her career in modeling and fashion seems to be right up her Scorpio alley, as is her future role of motherhood. And when it came to discussing kids with her husband, it was something she was definitely sure about but didn't rush into. Scorpios are major planners, according to Zodiac Things, so it was no surprise that she knew from the beginning that kids were inevitable in her marriage. "We are going to totally have kids. We are probably going to do it in the next few years. Just a part of my brand building," Graham jokingly told E! News in 2016.

In January of this year, she doubled down on her future hopes, telling ELLE: “For me, being a wife and being a woman, happiness doesn’t equate to having kids. Kids will come when they come. Happiness right now, is building with my husband and building my business.”

Graham announced her pregnancy on Instagram on her ninth anniversary to husband, Justin Ervin. Side note: Scorpios apparently love to post on social media according to Awakening People, which is good thing for fans who are dying for those first pics of the baby.

Speaking of social media, Graham's post to Instagram announcing the news was incredibly adorable. "Nine years ago today, I married the love of my life. It has been the best journey with my favorite person in the world!" she captioned a sweet shot of herself posing with Ervin. "Today, we are feeling so blessed, grateful and excited to celebrate with our GROWING FAMILY! Happy anniversary, @mrjustinervin. Life is about to get even better."

As for Ervin, she met her him at church and spirituality is a big part of both of their lives, a topic which also comes naturally to Scorpios, according to the astrologist James Vaan Praagh. And Graham's connection to spirituality could help with parenting too. She recently shared that she fasts one day a week with her husband, noting how it brings her strength and sensitivity. She said, according to People:

When you fast and you pray, it’s bringing more sensitivity to hear from God. That’s exactly what we wanted; we were like, ‘Okay, we want more sensitivity to be able to hear from God in the big decisions that we’re making.’ We do it together because there’s a verse in the Bible that says, ‘Where two or more are gathered, He is in the midst.’ So as we do it together, it just makes it even stronger.

If religion is a big part of Graham's life pre-kids, she'll most likely bring it into her child's life as well.

Furthermore, people with this sign are in touch with their feelings and "do not shy away from expressing exactly how you feel about someone or a situation," according to The Secret of the Tarot Card. Case in point: her beautiful pregnancy announcement. And it's safe to say that her first baby pic will be filled with the same type of love seen here.

For Scorpios, children are also a physical manifestation of her love for their partners which is something that both of them share, according to website AstrologyK.

Although the couple didn't divulge the baby's due date, it's possible fans can expect a late December or early January delivery thanks to the fact that most people wait until after the first trimester to announce their pregnancy, according to POPSUGAR.

For those who are curious, this would make her baby a Capricorn. And it seems to be a very compatible mix with mom's Scorpio roots, according to Astrology.com

Although astrology isn't exactly based in science, there are many people who rely heavily on the ancient art of following the stars. Whether Graham's zodiac can actually provide insight into how she'll develop as a mother, is still remains to be seen. But, from what fans can tell of this honest and warm-hearted woman, she's bound to be a loving caretaker. Congrats, mama!