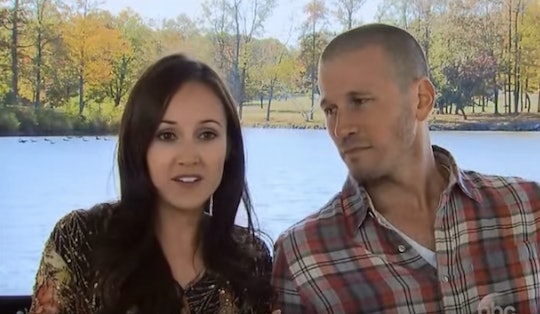 Ashley Hebert Is Pregnant & She Couldn't Be More Excited

Bachelor Nation, it's time to celebrate. Ashley Hebert is pregnant and she's totally stoked about it. The former bachelorette, from Season 7, tweeted an image of a positive pregnancy test with some super cute baby booties late Monday evening and wrote, "Bursting with love." On Instagram, she added that she "can't wait to stock up on cute tutus and sparkles" for her baby daughter, who will be her second child.

Judging by the pink booties and the Clear Blue partnership she hashtags in her announcement, Hebert and her husband, J.P. Rosenbaum, have probably known their good news for a few months. But you can't hold that kind of information for very long. Rosenbaum and Hebert were engaged during her season and then married in 2012. So far, they're one of the only Bachelorette couples to go all the way and start a family.

They actually just welcomed their first child, son Ford, in September of 2015. Hebert told OK! in February that she took some time to "enjoy mommy hood and enjoy all those baby moments" but that she was headed back to work as a pediatric dentist in Miami just this past March. It looks like she might not get too much time back before she has to head back to maternity leave.

"I think I’m ready to get back into the swing of things, but I’ll be able to balance it," she said. She mentioned that it was going to be tough, obviously, to leave him with someone else but that a balanced work life is good for her "sanity." "I think that it’s almost like you’re a better parent if you have well balanced life," she said.

Hebert did say in February that she wanted to have another baby as soon as she could. At the time, J.P. added that “we’re not actually trying but we will keep them close in age — 2 or 3 years apart at max." Life always strikes when you least expect it. Although, given that parents usually have to wait about 16-20 weeks to find out the gender of the fetus, it's possible that they found out just after giving the interview, or they knew, but were keeping it under wraps. But all of that is just speculation.

J.P. seems a little nervous about having a girl. He tweeted that though he was "100 percent" excited that they were pregnant, he was "78 percent" nervous because it's going to be a female. Aw, come on J.P., you never seem to have any trouble with the ladies.

Nervous or not, it's official — the Hebert-Rosenbaum clan is growing. The more the merrier, right?