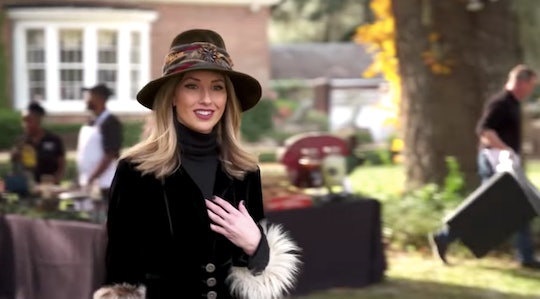 The first trailer for Season 6 of Southern Charm teased the return of Ashley Jacobs like Jaws threatened a shark in the water. First, there's just a car cruising down a tree-lined road, then high-heeled boots stalking down the pavement. Finally, she arrives in all her velvet-and-fur glory, a bohemian pilgrim hat atop her head. Every last detail indicates that Ashley Jacobs' return on Southern Charm is going to be a drama extravaganza.

The outfit alone is instantly iconic. I'm talking extremely niche Halloween costume iconic here. The scarf-wrapped hat, the turtleneck, the blazer with weird fur cuffs that sit two inches up the sleeves like arm guards — no one could have put together a better ensemble to attend a party where 99 percent of the guests want nothing to do with you. She looks like a wealthy witch from the 1970s who used to be a folk singer before going the full A Star Is Born and losing sight of what her dream was in the first place. It's good.

But it's sure to be nothing compared to what happens when Ashley comes face to face with her former cast mates. The trailer doesn't show the full fallout, which is reserved for the actual episode, but it offers just enough tantalizing hints.

It looks like Ashley returns in Episode 9, "Sorry Not Sorry," for a skeet-shooting party at Eliza Limehouse's family plantation. That is, apparently, a thing people do for fun. What seems more fun is Ashley eliciting theatrical screams from Chelsea Meissner as soon as she shows up. After the shock wears off, Cameran Eubanks serves up some real talk, exclaiming that Ashley once called Kathryn Dennis an "egg donor." Some slights cannot be forgotten.

Ashley must not get closure at that afternoon event, because she's back for a second party in the trailer. She turns up at Patricia Altschul's place, proclaiming that the "truth" will "come out" as she's led from the room by some men in suits. The rest of the women hustle to the balcony so they can watch Ashley be taken outside, where she immediately gets on the phone and announces that she's calling the cops. Those mere snippets of content promise more drama than anyone can handle. But I'm sure we will all do our best to try.

After Season 5, Ashley told People that she wanted a chance to have a "redemption story" on the show. "I'm not going to fight and I'm not going to play dirty," she said. "I'm going to smile and be nice. I never had the chance to do that on the show because I was so wrapped up in Thomas' drama. I was the villain, but people tuned in to watch. I'd like to give viewers the chance to see another side of me."

Ashley may have been ready to make peace at the time of that interview, but People also has an exclusive first look at her return to Southern Charm — and it's not exactly peaceful. She immediately gets into a spat with Whitney Sudler-Smith about his mother Patricia, which may be what leads to her removal from Patricia's party later on.

It seems like Ashley's return to Southern Charm remains perfectly in character.