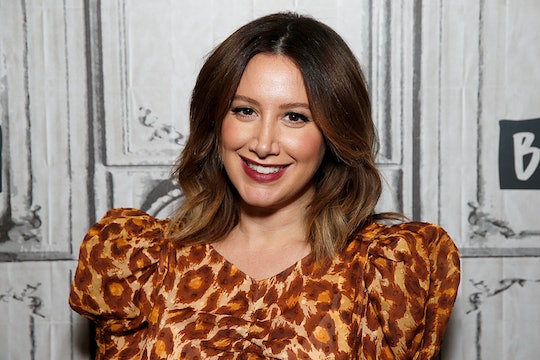 On Thursday, the High School Musical star shared two photos of herself wearing a long white dress and French facing each other with their heads sweetly touching. While Tisdale didn't caption the Instagram post, her visible bump and their loving smiles speak for themselves.

French posted an equally beautiful photo on his Instagram account featuring him with his hands on Tisdale's shoulders while she holds her bump. The mom-to-be commented with three red heart emojis.

The couple married in 2014 after a 13 month engagement, according to E! News, after making their first public appearance in 2012. French is a composer and musician and had never seen any of the High School Musical films before meeting his future wife.

In a recent Instagram post, Tisdale had the sweetest things to say about her husband. "Chris you truly have made me a better version of myself because you keep inspiring me everyday," she wrote. "Your heart is pure, you would do anything to make me happy, through the ups and downs you are my solid rock. I'm so grateful I get to be your wife." And now they're about to be parents together.

In 2015, Tisdale told E! News that she wasn't quite ready to start a family just yet, choosing to focus on work and being with her husband. Tisdale repeated this to People last year, saying that she wasn't ready for kids at the moment. "For me, it's like, it's OK to not want to start a family right away," she told the magazine. "People are always asking me about that, but it's just not the right time."

But it looks like she and French are officially ready for this next chapter of their lives. And now that they've shared their exciting news with the world, hopefully Tisdale will soon reveal more exciting updates about her pregnancy in the coming months.