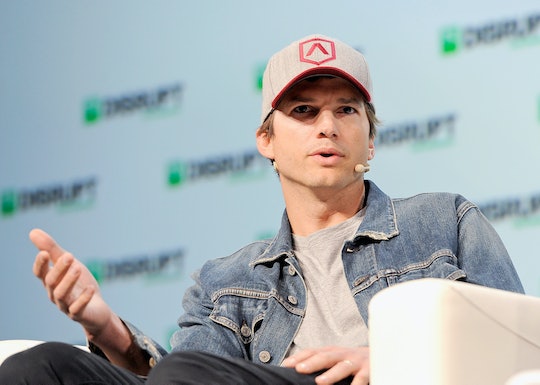 A baby's first steps are, undoubtedly, one of the biggest milestones a new parent can experience. But it doesn't mean that once toddlers start walking, parents start letting them roam free on their own volition. Imagine the chaos. Imagine the falls. Imagine the time it would take to get from point a to point b. Even celeb parents know that's not doable. So what parents to do? Ashton Kutcher shared a rare tidbit about his 2-year-old son after Ellen DeGeneres teased him for not walking.

This week, Kutcher was a guest on The Ellen DeGeneres Show when the host brought up son Dimitri Portwood's lack of walking, according to People.

Kutcher and DeGeneres are neighbors and she often sees the famous dad and son duo headed on walks together, except only one of them is on two legs.

“The young boy that never walks is how old?” DeGeneres asked Kutcher during the interview.

DeGeneres joked that she never sees Dimitri walk — he's always strapped to his dad's back.

What Kutcher went on to explain is totally relatable. Let a toddler down when you're out on a mission and you may never get to where you are going.

"I now have a complex about this because I have one of those hiking backpack things,” Kutcher said during the interview. "I put him in the hiker to go down the beach so we can actually go down the beach. Otherwise it’s a whole wrangling session with the kid. And then you came out and you were like, 'Oh, does he walk?' And I was like, 'Yes! He walks!'"

Now, Kutcher jokingly said that he takes his son out and has him run past DeGeneres's house, just so she won't tease them anymore, according to People.

Of course it's all in good fun and Kutcher even thinks it will have a positive affect on little Dimitri, he said during the interview.

"This kid’s going to be an Olympian, man, because I’m going to be behind him like, 'To Ellen’s house! She’s watching!'"

Kutcher has two children with his wife, Mila Kunis. Dimitri was born in 2016 and has a four-year-old sister, Wyatt Isabelle, according to Us Weekly. Both Kunis/Kutcher kids are famously kept out of the limelight, as their parents want both of them to decide on their own whether they want a life in the spotlight or not, Kutcher told Ariana Huffington on an episode of The Thrive Global Podcast.

But really, the banter between Kutcher and DeGeneres is sweet and funny. Maybe DeGeneres should consider Kutcher as a co-host? Hey, it could happen. Overall, Kutcher is just a dad trying to make life with two kids livable. And isn't that what most parents are trying to do? Go get 'em Dimitri, and keep taking those free rides for as long as you can.