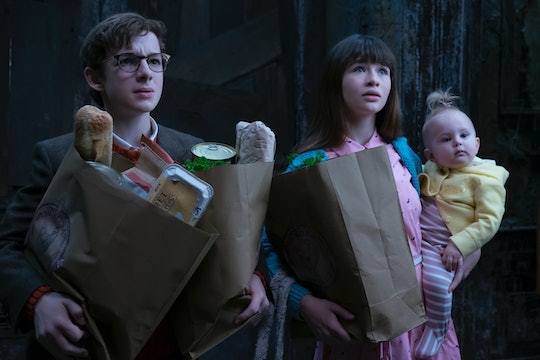 (Warning: this post contains unfortunate spoilers from Episode 8.) The first season of Netflix's A Series of Unfortunate Events is finally here and fans are already begging for more. The show, which follows the unfortunate lives of orphans Violet, Klaus, and Sunny Baudelaire, was filled with many twists and turns, leaving fans wondering what will happen next. Fortunately, there are a few clues about a possible Season 2 of A Series of Unfortunate Events, which come right from the cast itself. Romper spoke to Malina Weissman and Louis Hynes, who play Violet and Klaus, the eldest and middle Baudelaire children, respectively, and though neither could confirm that there will be a second season, they are both definitely hopeful there is one.

"I think a lot of people are preparing for one," Weissman says, in regards to the possibility of another season. The first season ended on a bit of a cliffhanger. Mr. Poe dropped off the Baudelaire children at Prufrock Preparatory School, having exhausted all their guardian options. Along with the Baudelaire children are two of the Quagmire kids, who also recently lost their parents to a fire. Although the two groups of children haven't met yet, according to Weissman, fans will definitely see more of them next season.

If the show continues to stick as closely to the books as it has, fans can expect a team up between the two groups of orphans, although their lives probably won't get anymore fortunate than they currently are. Still, as Lemony Snicket said at the end of the episode, it's always nice to have friends who know what you're going through.

As for Hynes' take on the show's future, he too believes that a renewal is pretty much inevitable and admits that many are already preparing for a second season pick-up. "I think a Season 2 is looking hopeful at the moment," he reveals. "I know there are ideas and emails being passed around, but there hasn't been an official go ahead as far as I know." He adds, "I am certainly hoping for more deceit... there are so many more books to explore it would be a shame not to!!"

Besides seeing more of the Quagmires, Weissman and Hynes couldn't give us too much more info on what to expect in the next season. However, Weissman did say she's hoping for more costumes for herself and her fellow young co-stars in the future. "From reading the books, I know me [Violet], Klaus, and Sunny have a lot of costume changes, which is awesome because the first season we're ourselves the entire time," the 13-year-old actress remarks. "I'm excited to see if they continue having Violet, Klaus, and Sunny dress up more."

Meanwhile, Hynes is anxious to explore a particular storyline that takes place underwater, believe it or not. "In the books, there is a brilliant section based in a submarine that I would love to have a play around with," he says. "I am definitely looking forward to that." He would also be very interested to delve more into the backstory of the Baudelaire parents so that we can actually see what they look like — for real this time. "I would love to see the Baudelaire parents return in flashbacks or even a new plot line," he explains. "It could make for some great cameos and definitely add to the excitement and misfortune of the tale."

Costumes, submarines, and flashbacks would all be great additions to the show. One of the best parts of this series is how, even in the face of unfortunate circumstances, the imagery and storytelling has been stunning, along with the acting itself. (Seriously, you won't be able to stop yourself from falling in love with these characters. It's impossible.) So really, how could you not have a second season with such an incredible cast and crew? That wouldn't just be unfortunate — it would be downright criminal.