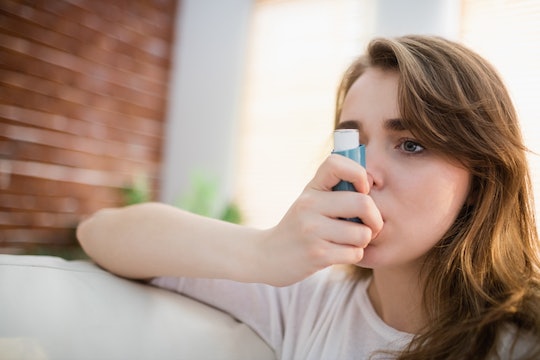 Your Inhaler Could Hurt Your Fertility, Study Claims — But Don’t Freak Out

For people with health problems, the possibility of infertility is often a top concern. Many medical conditions have been linked to fertility issues throughout the years, and if you have asthma, you might be worried about a new study that claims asthma medication can cause infertility. Although the study is alarming, there's no need to panic.

A new study published in the European Respiratory Journal found that people who use short-term medication to treat asthma have a 30 percent increased risk of failing to get pregnant within a year, according to The Telegraph. Researchers at Adelaide University in South Australia studied 5,000 women around the globe for Screening For Pregnancy Endpoints (SCOPE), a project that aims to "predict and prevent the major diseases of late pregnancy," according to its official website.

Researchers asked participating women questions about their asthma diagnosis and what medications they use to treat the condition. Participants who reported having asthma also struggled with fertility issues.

If you're not familiar with the different type of asthma medications, it's important to know the distinction between the two. The good news it's pretty easy to tell the difference — blue inhalers are for short-term relief (think emergencies) and brown inhalers are for managing symptoms and preventing attacks. A brown inhaler, in comparison to a blue one, builds up a resistance to triggers throughout a long period of time using steroids. There are other types of inhalers (red, purple, green, etc.), but this study focused on blue versus brown. If you have a question about the color of your inhaler and what it means, it's a good idea to bring your concerns to a trusted medical professional.

That all being said, why is there such a big difference between the brown and blue inhaler when it comes to infertility?

Dr. Grzeskowiak explained, according to the Daily Mail:

As well as affecting the lungs, asthma could cause inflammation elsewhere is the body, including the uterus. It could also affect the health of eggs in the ovaries. Inhaled corticosteroids suppress the immune system, whereas short-acting asthma treatments do not alter immune function. In women who are only using relievers it’s possible that, while their asthma symptoms may improve, inflammation may still be present in the lungs and other organs in the body.

Translation: it's recommended that people who struggle with asthma work to get their symptoms under control for the sake of their overall health. And it goes without saying that a strong immune system will help improve your fertility.

Dr. Erika Kennington, head of research at Asthma UK, reiterated this sentiment in an official response to the study. Dr. Kennington stated, according to Web MD:

This study shines a light on how vital it is that people with asthma take their preventative brown inhaler ... this will not only build up protection over time in their airways, preventing them from having a potentially fatal asthma attack, but this study suggests it also means their fertility will be less likely to be affected ... We'd encourage everyone with asthma to take all their medicines including their preventer inhaler. We'd advise women with asthma who are trying for a baby, to ensure they get their asthma under control and to speak to their doctor if they don’t have a preventer inhaler.

Of course, this study isn't meant to shame people using a short-term inhaler to manage their asthma symptoms. This study is meant to bring awareness to the potential risks of using a short-term inhaler. Similarly to what Kennington said in her statement, if you have asthma and also have concerns about your fertility, talk to your doctor about what plan of action is best for you.