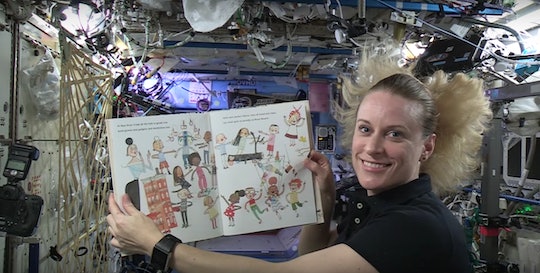 Guys, Your Kid Can Get Their Story Time From Astronauts In Space

If you have young children, then you've probably heard all about why it's so important to read to them, and to help them foster a love of literacy. But when you're parenting in an age of iPads and Netflix, books can sometimes seem a little boring in comparison. Thanks to a cool initiative from the non-profit Global Space Education Foundation though, there's a new way to get your kids engaged in reading (and they'll learn a little science while they're at it!). Here's how astronauts can read to your kids from space, because what could possibly be cooler than watching a female scientist reading Rosie Revere, Engineer from the International Space Station (ISS)? (Absolutely nothing, is the answer.)

Story Time From Space is a program made up of "astronauts, scientists, [and] educators," among others, according to The Huffington Post, who organize reading sessions led by astronauts currently orbiting the Earth. Basically, the group chooses engaging books "that can be read in about 15 minutes," and which focus on some aspect of science, technology, engineering, or math (STEM). The books are then sent on a literal space launch to the ISS so that the astronauts can film themselves reading them, culminating in what has to be the most awesome children's story time experience ever.

There are already a dozen story time videos available to watch on the Story Time From Space website, with three more coming soon. And one of the books — Max Goes To The International Space Station — is even read in Japanese, by astronaut and engineer Koichi Wakata. Wakata also read a second book in English, The Wizard Who Saved The World, while the remainder of the books are read by British astronaut Tim Peake, and American astronauts Mike Hopkins, Tim Kopra, Joseph Acaba, Mark Vande Hei, and Kate Rubins.

As much as your little one will almost certainly love getting to watch a real-life astronaut read them a story, soon they will also get to watch astronauts performing science experiments aboard the ISS. There are nine experiments on the way, according to NASA, focusing on basic science concepts like "balance, buoyancy, surface tension, orbits, light, heat transfer, free-fall, pendulous motion, and the human body." The experiments were chosen to cover a range of ages and grades, and they will also relate to the concepts written about in the books astronauts have read to kids.

As valuable as the initiative is for all children, Story Time From Space might be particularly powerful for young girls. Women tend to be greatly underrepresented in STEM careers, according to The Guardian, even in countries like Sweden that tend to have less of a gender divide. Part of that reason is due to gender stereotypes — that girls aren't as good at math, for example, even though research has found that "there is little to no difference in boys’ and girls’ average ability at [STEM] subjects." One small, yet helpful solution? Let them watch while Kate Rubins — a microbiologist and virologist turned NASA astronaut, who, according to The Scientist, was the first to sequence DNA in space — reads to them from an actual orbiting space station.

Of course, letting your kids watch people reading on the internet isn't the same as sitting down with them one-on-one to read a book together, and research has consistently shown that reading to our kids regularly can actually have a huge impact. Studies have found, for example, that reading to our kids not only helps boost literacy skills, but also "[shapes] their social and emotional development," according to The New York Times. And if that weren't enough, it may even play a role in reducing behavior issues like aggression and hyperactivity.

For those of us who have screen-loving kids though, Story Time For Space can at least be something we can feel good about letting them watch. And, hey, it might also be a good option to watch together. Because, let's be honest, space never stops being fascinating, even if you've long given up on your childhood astronaut aspirations.