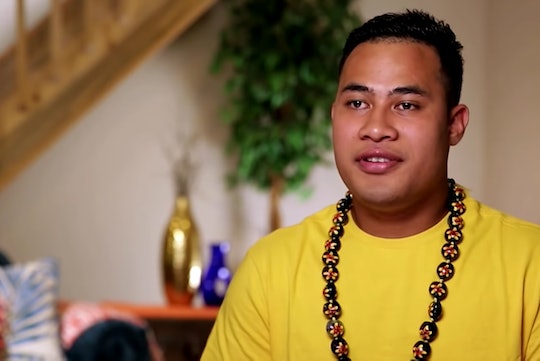 Kalani Faagata and Asuelu Pulaa's relationship during Season 6 of 90 Day Fiancé has only just begun — and people already have a lot of emotions about it. As soon as he stepped off the plane into the United States, Pulaa surprised his fiancé with a traditional dance from his home. Although it was a super sweet gesture, Asuelu's airport dance for Kalani on 90 Day Fiancé has a lot of people on Twitter conflicted — they can't tell if it was super sweet or just a little strange.

Kalani and Asuelu met and fell in love while she was vacationing in his home country of Samoa, according to People. The couple comes from two completely different places — Kalani's home of Southern California is a far cry from the small fishing village where Asuelu grew up, according to People. So, of course, she isn't super accustomed to her fiancé's culture and traditions — or seeing them play out in her home country.

Kalani and Asuelu's reunion in the United States was a super happy occasion — the couple kissed as soon as she got to greet him at baggage claim in the airport. And because Asuelu was overcome with happiness, he broke out in to a traditional dance. "I need to do a little bit of extra, extra dance," Asuelu said, before stripping off his shirt and dancing.

People on Twitter were just as surprised by the dance as Kalani was by it.

A lot of people thought the dance was a super nice way for Asuelu to greet Kalani.

But others didn't know what to make of it.

Asuelu's dance wasn't just a happy dance that he made up on the spot — it's something that is unique to his culture. The dance, or haka, is a "traditional Maori war dance in which participants stamp their feet, stick their tongues out, slap their chests, and shout in unison," according to Business Insider. The dance is meant to welcome guests to special occasions where people might be overcome with emotion, according to TODAY, such as weddings or funerals.

And because Asuelu was so overcome with emotion when he arrived in the United States to begin his 90 days with Kalani, it makes sense that he would perform this haka for her. "I did my dance for Kalani because I wanted to surprise her," Asuelu said. "And make her feel proud of me. And make her feel happy and things like that."

Although it drew a lot of attention to the couple in the airport, he looked super happy to be performing his dance. And if Kalani was acting coy about the dance, it did impress one of the workers at the airport. "If things don't work out with her, let me know," the woman said.

After he performed the dance and headed back to her home, Asuelu was just as happy to see their 5-month-old son, Oliver — even though the baby cried while he was in his arms.

Although Kalani might have been embarrassed by the haka, his dance was just a testament to his excitement to be in the United States and be reunited with Kalani and their son. And people can't blame him for expressing that excitement.