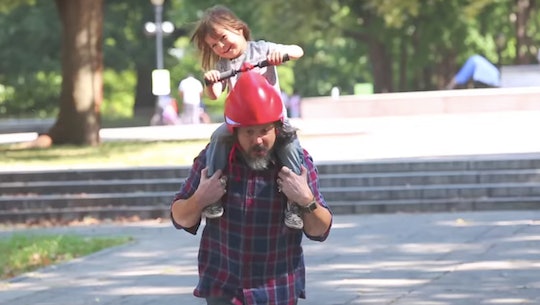 Finally, A Toy That Lets Your Kid Literally Drive You Crazy

Having kids comes with many challenges, that much is basically non-debatable at this point. From the costs of child care, to the sacrifice of a proper sleep schedule, parents have to put up with a lot. And while sometimes playing with your kids can actually be pretty fun, it can also be pretty exhausting, which is why buying your little ones a new toy now and then is a great way to distract them. Unless that toy happens to let them literally drive you crazy, in which case, why did you even buy it in the first place?

All things considered, the Piggyback Driver helmet, as it's called, takes good old-fashioned piggybacks up a notch (or a thousand), and from the videos the company has put out so far, it actually looks pretty fun. The toy basically functions exactly the way you think it would: It's a simple, chin-strap helmet for parents to wear while giving their little ones a piggyback ride, and it has handlebars for your kid to use to "steer" you like a bike. The helmet takes on the look of a motorcycle, in a way, to add another element of fun to the activity. In addition to handles, the helmet also features a horn, playful steering functions, and LED lights along the sides. As of yet, the helmet isn't actually available for purchase, but that could change very soon.

According to a statement on its official website, the company states that it's "searching for partners and collaborators that can help us create a production model of the Piggyback Driver." And while the helmet isn't actually a toy motorcycle — it can't force parents to go in the direction their kids want to, no matter how hard they try — it does still have some pretty cool features. As Mashable reports, "By turning the handlebars, the helmet vibrates to tell parents which direction to take."

However, the toy also comes with some potentially annoying traits. The horn on top makes a sound when pressed, as does the boost" button between the handles. So, yeah. Children would be able to press not just one, but two buttons that make sounds. From a toy. One that adults wear on their heads.

In other words, proceed with caution, tired parents.

Of course, the helmet's safety feature — giving kids the ability to have something to hold on to while atop their parents' shoulders — is pretty fantastic in and of itself, despite the possible headache it might cause. And while it might not be for everyone, the Piggyback Driver helmet will definitely be the hottest new toy once it's available. Whenever that may be.