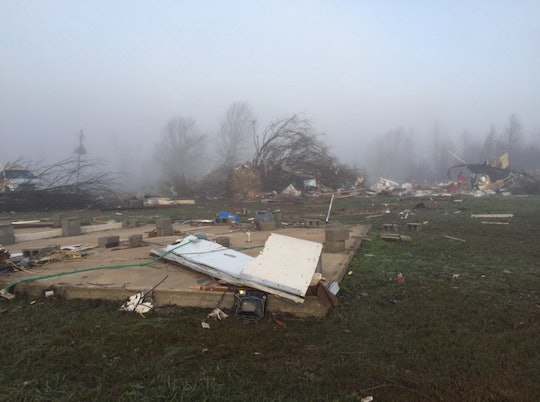 On Wednesday, a series of unseasonably severe storms tore their way across seven states including Arkansas, Mississippi, Alabama, Tennessee, Illinois, Indiana, and Michigan, spawning two dozen deadly tornadoes overnight. Officials have stated that at least ten people are dead in the wake of Wednesday's storms, with dozens of others injured and several people still missing. Among the dead in are a 22-year-old man in Rhea County, Tennessee; a 70-year-old man and a 69-year-old woman in Perry County, Tennessee; a couple in their sixties in Benton County, Mississippi; and a 7-year old boy in Holly Springs, Mississippi.

The Tennessee tornado has preliminarily been rated an EF-3 tornado by the National Weather Service in Memphis. Affected communities throughout these seven states have been left with severe damage, with some homes and businesses completely destroyed. Many roads in these states have been left impassable, hampering rescue efforts. These storms have also severely impacted holiday travel, with FlightAware reporting over 700 cancellations and over 5,200 delays at the time of writing. Storm-weary residents aren't completely out of the woods yet either, with the National Weather Service forecasting more severe weather and flash flooding across much of the southeast and mid-Atlantic over the next 48 hours.

Between the death and destruction left in the wake of Wednesday's storms, it will be a difficult Christmas this year for those affected by these storms. Here is a list of local relief organizations helping tornado victims if you're looking to contribute to relief efforts.