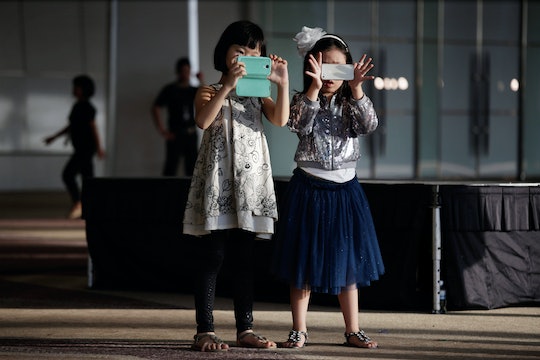 At What Age Can Kids Use Instagram? Too Many Kids Are Getting Around the Age Limit

Young kids and tweens using social media, especially Instagram, seems completely normal. But most social media websites have rules that should prevent younger kids from being able to join. So at what age can kids use Instagram? Because all parents absolutely need to know.

Instagram's policy is that children must be at least 13 years old to use its service. This minimum age requirement is in line with many other social media sites such as Facebook and Snapchat because of standards set by the Children's Online Privacy Protection Rule ("COPPA"). Websites and online services may not collect data on children under 13 years old without parental consent — but if a 9 or 10-year-old joins Instagram pretending to be 13, COPPA can't protect them.

While it's hard to find data showing just how many underage kids use Instagram, statistics for other social media accounts suggest it's extremely common. A study from safety advisory site KnowTheNet revealed that 59 percent of kids use social media before the age of 10. The study, which surveyed more than 1,000 children aged 8 to 16, also reported that most kids set up a fake profile for themselves for the first time at 11 years old.

As parent Michelle Meyers wrote at CNET, younger kids may be flocking to Instagram because their parents aren't on it. While the average groups using Facebook are 25 to 34 year olds and the 55 and older crowd, Instagram's largest user demographic is 18 to 24 year olds. Meyers suggests that because many kids' parents don't use the app, "they can be a little freer with what they post and comment" on Instagram.

Some parents and experts feel that kids under 13 who use social media accounts are too young for them. “Some kids may be ready to handle social media under the legal age of 13, but most probably can’t,” said Parents Magazine advisor Michael Rich. Even older teens don't always handle their social media use well — a Pew Report revealed that one in five teens have posted something they regret.

While every child is different, “At ages 7 to 11, children are still thinking very concretely, and they haven’t yet developed the ability to consider hypothetical situations,” said Lisa Strohman, founder and director of the Technology Wellness Center, in an interview with Parents Magazine. Younger children often don't understand the consequences of posting on social media. Strohman added:

So an 8-year-old girl posting a video about how to do her hair is just thinking, "My friends will see this and it will be great!" She can’t take that next step and think about who else might watch that video and write mean comments or even repost it and use it to sell hair products.

Experts advise that parents have access to their child's social media accounts by learning his or her username and password, by following their child's accounts, and by monitoring who follows each account.