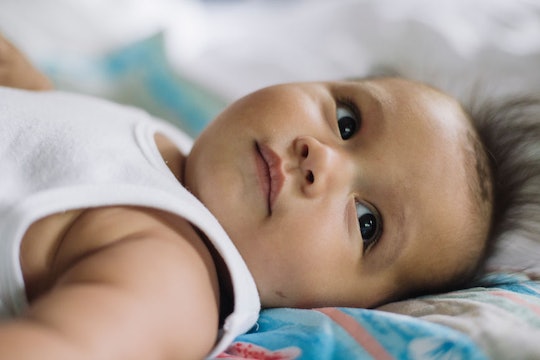 Before having children I rolled my eyes at parents who planned everything around when their baby needed to nap. Why let that pint-size person call the shots? But now, as a parent of two little ones, I know better, way better. The difference between a well-napped baby and an overtired one is staggering, and at times, hair-raising. But, like so many things about new parenthood, trying to figure out what age nap times become regular can feel like an exercise in frustration.

You hear fellow parents tell you that their baby was on a predictable nap schedule almost immediately, or conversely, that their baby just "wasn't a napper." You're left trying to navigate your own baby's naps with a dim hope that things will, eventually, settle into more of routine. But here's the good news: While it's true that no two babies are the same, there is a general timeframe when frazzled parents can expect to see their baby's sleep take more shape.

"The nap schedule starts to develop at around 3-4 months. ... Typically by 5 months, a solid sleep schedule is in place. If the schedule is still unpredictable, it's a good idea to try to establish it by keeping naps to specific times," explains Janet K. Kennedy, PhD, clinical psychologist and author of The Good Sleeper: The Essential Guide to Sleep for Your Baby (and You), and founder of NYC Sleep Doctor, in an interview with Romper.

Even if you're little one seems to be particularly nap-resistant, that doesn't mean all hope is lost. "Some [babies] naturally fall into a nap pattern while others need a little help developing a nap schedule," Christine Stevens, a Washington D.C.-based sleep consultant and founder of Sleep Solutions by Christine, tells Romper.

But if a baby needs help napping, what exactly does that look like? My go-to move was always to pop on the baby carrier and either pace my apartment or hit the pavement. But, that maybe wasn't the best strategy in the long run. "It is important to create routines and consistency to help establish the nap schedule. By 3-months of age, babies will sleep better at home, in a crib, in the dark. It gets much harder for them to get the quality of sleep they need if they are on the go or in the middle of the action," explains Dr. Kennedy.

Another issue that I struggled with — and so many of my mom friends have also complained about — was that my baby could easily fall asleep while nursing, but transferring her to her crib was another matter. Dr. Kennedy notes that it's important to let babies learn how to fall asleep in their cribs, not your arms. "Falling asleep in the crib helps babies lengthen naps because they learn to return to sleep independently when they finish a sleep cycle," says Dr. Kennedy.

It's also a good idea to try to upstream naps by being on the lookout for signs of tiredness from you baby. "Between 3-6 months, babies should only be awake about 2-2.5 hours before needing another nap. When you notice your baby's sleepy cues, such as rubbing their eyes, turning away, getting fussy, etc., consider that it might be time for a nap," explains Stevens.

If you're already practicing solid techniques and your baby seems like the opposite of a good napper, then what? While every parent has a different stance on sleep training, once your baby is old enough (many experts say between 4 to 6 months), some form of training is an option.

"Babies often fight sleep, especially during the day, as they become more social and aware. And babies who don't know how to fall asleep on their own start to really struggle because parents' and caregivers' soothing efforts become stimulating. By putting the baby down and letting her fuss or cry to settle down to sleep, parents can teach the baby how to self-soothe and get the sleep she needs," explains Dr. Kennedy.

Just know that while a predictable nap schedule might seem as elusive as a unicorn now, it is totally achievable. And, take it from me, once you have a consistently napping baby, the whole world really does seem like your oyster.