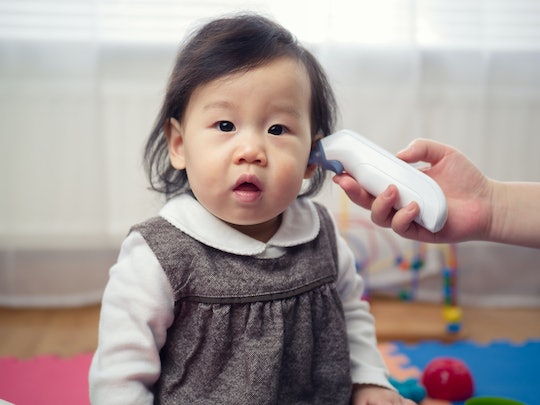 No matter how bundled up and germ-free you attempt to keep your little one this winter, the odds are pretty good she's going to end up with some kind of nasty cold or bug at some point — and the odds are also pretty good that said cold or bug will come with flushed cheeks and a burning forehead. Fevers are an inescapable part of growing up, and they're usually not an immediate cause for concern in toddlers (unlike young infants), though they can be uncomfortable. But at what temperature is a fever dangerous for a 1-year-old?

We asked Peter Jung, M.D., author of What to Know Before Seeing Your Pediatrician, how high a toddler's fever should be before parents should call the pediatrician — but it turns out there's more to the answer than what the thermometer says. "A reasonable number to touch base with a doctor is anything 102 or higher," Dr. Jung tells Romper. However, "the numerical value of the fever, as a general rule-of-thumb, is not as important as the overall demeanor of a child," he continues.

"Are they eating/drinking? Are they interested in playing (particularly after given a fever reducer)? Do they engage with other people? Are they sharing any smiles? If a child's demeanor is overall healthy then the fever, regardless of the value, is not too concerning. However, if the overall demeanor is down, even after receiving a fever reducer, then one should contact the physician."

Your child's age plays a role in how you'll react to fever, too. As Dr. Jung explains it:

"The four broad categories that fever age groups are lumped into are: 1 month and younger, 1 month to 3 months, 3 months to 3 years, and older than 3 years. For any child 1 month and younger every fever (100.4 or higher) needs to be evaluated by a pediatrician ASAP. For children 1 months to 3 months, if there is fever and an additional accompanying symptom such as not eating or lethargy or vomiting, they need to be evaluated that same day. For children 3 months and older demeanor is a better tool than the numerical value of the fever, however, a reasonable number is 102 or higher for 3 months to 3 years, and 103 for children older than 3 years."

High fevers are definitely nothing to ignore — but they're not uncommon, either (in fact, healthy kids can sometimes run fevers as high as 106 without complications).

Most of the time, though — and again, this is NOT necessarily the case with younger babies, whose immune systems are not fully developed — your toddler's fever is a sign that her body is doing what it's supposed to be doing: fighting off an infection. Still, there are some important red flags to watch out for which could signal a more serious underlying infection, even in lower fevers, advises Healthy Children. You should call your child's doctor immediately if they:

Assuming that your child is in no grave or immediate danger, there are a variety of things you can do to help them feel more comfortable while their body is doing battle. Low-grade fevers (between 99 and 100.9 degrees Fahrenheit) don't necessarily have to be treated, because they're actually helping your toddler's body to fight off whatever illness they've picked up, according to Dr. Sears. Higher fevers can be treated with acetaminophen or ibuprofen (be sure to follow package directions according to your child's weight). Cool liquids, a cool washcloth on your child's head/body, and lukewarm baths can also help to make them feel better, too.

Lastly, there's the question of how to actually get a precise reading of your kid's temperature. As you've probably learned, 1-year-olds aren't great at sitting still for very long — particularly when they're not feeling well to begin with and someone is poking and prodding them. That's why it's too bad the most accurate method of temperature-taking is with a rectal thermometer. Oh boy, do cranky kids ever hate that one! They don't generally love the oral route, either, or even the underarm method (but that's no loss, as it's considered the least accurate way to go). Battery-operated ear thermometers tend to be better tolerated by toddlers than the others, though they're pricier, too, as are temporal artery thermometers (this is probably the kind used in your pediatrician's office). Any of these options are ultimately acceptable if used properly, however.

So remember, don't freak out right away if your tot feels warmer than usual — it's probably just a sign that her immune system is functioning properly. But if you're ever in doubt, and if the thermometer reads higher than 102 degrees Fahrenheit, don't hesitate to call the doctor. You won't be the first panicked parent to do so... or the last.