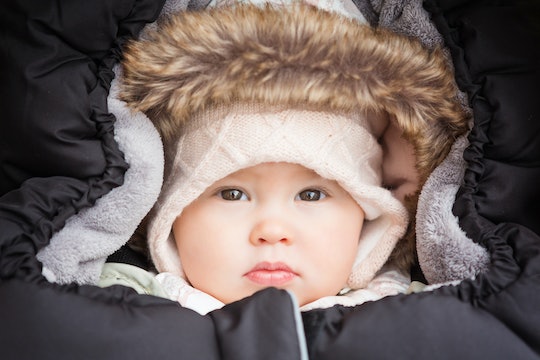 Yes, It Can Be Dangerously Cold For Your Baby To Be Outside

Many people tend to dismiss old school advice about babies — and considering how off-base and even harmful some outdated childrearing theories were, you really can't blame any parents for doing so. But if you had one of those grandmas who was always covering babies in blankets and clucking about keeping little ones warm, it turns out she was actually on to something: Newborns and infants can't regulate their core body temperature, so it actually can be dangerous for them to get too chilly. So at what temperature is it too cold for a baby to go outside?

As completely mind-numbing and delirium-inducing as it can be to be stuck in the house with a baby for what feels like (and sort of is) months on end, there will likely be days during the winter when it's best to keep them inside as much as possible — unless you live in some dream locale with blissfully moderate temps, in which case, why are you reading this? Those brutally cold days might happen more frequently than you think: Basically, if it's below freezing outside — that's 32 degrees Fahrenheit, just to remind you — you'll want to limit your baby's outside time to quick jaunts from the house to the car, the car to the store, and so on. "Limit the exposure to the cold elements to a few minutes at a time," shared Janice Montague, MD, director of pediatrics at Good Samaritan Hospital to Fit Pregnancy. It might seem like 32 degrees isn't all that cold, but there is the wind chill factor to consider, too, plus your infant's inability to adjust correspondingly — which can have very scary consequences.

Apparently, newborns are "prone to hypothermia​ because of their large body surface area, small amount of subcutaneous fat, and decreased ability to shiver," states to the American Academy of Pediatrics. That's right, shivering actually serves a purpose: When the surface of the skin gets too cold, receptors send signals to the brain which make our muscles twitch, raising our body temperature in the process. Believe it or not, hypothermia can occur at any temperature lower than normal body temperature, reports Business Insider, and can be rated as mild, moderate, or severe. Severe hypothermia can cause arrhythmias, an abnormal beating of the heart, and can be difficult to spot in little ones: Babies with hypothermia might look healthy, but their skin will be cold to the touch and they might be limp, quiet and refuse to feed.

Then, of course, there's the rather terrifying prospect of frostbite. You might think of this scary condition as something that happens mostly to mountain climbers scaling Everest, but it can happen anywhere. Let's say the mercury plunges to 0 degrees Fahrenheit this winter (maybe it already has where you live!). With wind speeds of 15 mph, the wind chill temp would drop down to -19 degrees Fahrenheit. If, for some reason, an adult were outside under those conditions, she could develop frostbite in only 30 minutes. Babies, unsurprisingly, are particularly vulnerable to frostbite, particularly on their noses, ears, cheeks, fingers, and toes. Frostbitten parts turn white or yellowish gray and can become permanently damaged... or even lost. More common (and less serious) than frostbite is a condition known as "frostnip," which has similar symptoms but isn't as painful or dangerous.

Of course, sometimes it's just not possible to keep your baby indoors in frigid weather. When my oldest was in preschool and we lived in Brooklyn (without a car), I had no choice but to bring my infant son along when we walked the five blocks to and from school every morning and afternoon. So what did we do? We layered, big-time — which is what experts recommend. (The rule of thumb: Babies younger than 12 months need one more layer of clothing than whatever it is you need to be comfortable, and always keep their heads, hands and feet covered.) If you're pushing your baby in a stroller, try using a stroller cover for extra warmth, but be sure it's fitted to your particular stroller and allows your baby enough air. If you choose to wear your baby, all the better: That added body heat will keep you both extra toasty!

Winter with a new baby can be challenging, to say the least. But hang in there... before long you'll be wondering if it's too hot to go to the playground! Yes, the cycle of worry never ends.

More Like This
The Best Apps For Selling Used Baby Gear
First Look: The New Jujube x Lilo & Stich Collaboration
Here's When Your Baby Might Start Sleeping Through The Night For Real
Can You Help Your Baby’s Hair Grow?