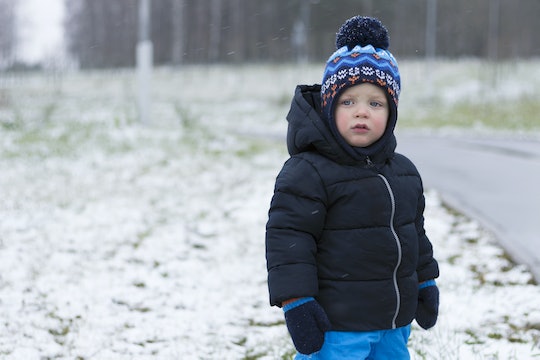 Cabin Fever Is Real, But Here's When It's *Too* Cold For Your Toddlers To Be Outside

Hear me out: I let my children play outside even when it's really, really cold. I always have. I live in a neighborhood populated by immigrants primarily from northern Russia, the Ukraine, and the high mountains of Slovakia and Belarus. We are a cold-loving people. The region of Slovakia where my Grandmother is from in the Tatra Mountains in the Carpathians gets bitterly cold, and she ushered my happy behind outside to play all the time as a child. Is it safe though? At what temperature is it dangerous for a toddler to go outside?

In northern regions all over the world, from Toronto to Siberia, it's not uncommon to see parents taking their children outside in sub-zero temperatures to get exercise and fresh air. The American Academy of Pediatrics (AAP), however, recommends keeping your children indoors once the wind chill reaches -15 degrees Fahrenheit. Other than that, it's all about keeping dry, bundling up, and taking frequent warming breaks.

There are more pictures of me as a toddler and child playing in the snow than there are of me playing in the sunny warmth of summer. I've never liked the heat. It's just so... well, hot. Even as a child, the idea of getting sweaty and burnt never appealed. However, rolling down my backyard hill in the snow and sledding for hours upon hours? That was the most fun I would have all year.

In Norway, it's not uncommon to see mothers leave their babies outside in their prams to nap when it's below zero (Celsius) outside, according to the BBC. They claim the babies nap better, longer, and are all the happier for it. I witnessed the same phenomenon with the moms and grandmothers in my area. It doesn't matter how cold it is outside, for the most part, you'll see parents pushing babies in their strollers, bundled up, when it's 15 degrees Fahrenheit outside. The babies are knocked out and happy. I did the same for my children and it really does work. They sleep like tiny bundled logs, and wake refreshed and happy with the sunlight and fresh air.

According to the AAP, the danger in cold weather for your toddler depends a lot on if you know how to appropriately bundle your baby. The organization suggested using several thin layers, and possibly a snowsuit. This will keep them dry and comfortable. Make sure their boots are waterproof and their gloves are insulated, too. None of those thin stretchy things for the coldest days. The key is that they should be dry, not sweating, and their core should be slightly warmer than their extremities. Their fingers shouldn't hurt or go numb, and the same goes for their toes. If it's really cold, go in every 20 to 30 minutes to warm up a bit before going back out.

However, hypothermia and frostbite are real and dangerous. The AAP warned that if your child is acting confused or slurring their speech, or if they're more uncoordinated than what's normal for them, they need to be warmed up immediately and seen by a doctor. Those are the signs of hypothermia. It's scary, and if you're being cautious it's highly unlikely to happen, but it can, according to an article in the CBC.

Where hypothermia seems to affect the interior, frostbite attacks the exterior. It's the freezing of the outer layers of the skin affected by the cold, and it can be very dangerous. If a digit, hand or foot blanches, turns bright red, is numb or painful, these are some of the symptoms of frostbite, according to The Mayo Clinic. The skin may look waxy or blister upon warming. Frostbite happens most often in the extremities and on exposed skin, and it can happen fast, so bundle up, buttercup.

If you're raising a snow baby like me, it's hard to keep them indoors when the lure of the cold is just outside their reach. However, with a few strategies like bundling up and taking warming breaks, it can be done safely, even in very cold weather.