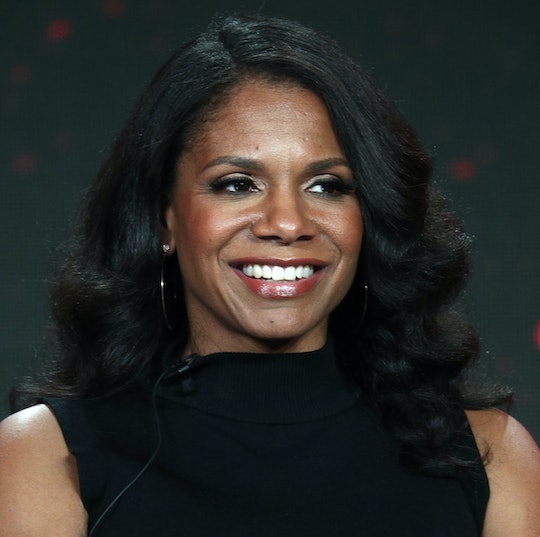 The royal family can't catch a break, especially the Duchess of Sussex, who's come under attack at every turn amid what should be an exciting first pregnancy. Fortunately they have friends in high places. Audra McDonald defended pregnant Meghan Markle in an Instagram post because she's had it with the criticism and everything else the duchess has had to deal with during her pregnancy, as reported by Harper's Bazaar.

Per the outlet, the Tony Award winner shared a video on Instagram of herself at "about 8 months pregnant," writing that she was in shock of all that Markle, 37, "has had to endure from social media and the press." McDonald went on to say the she'd recently read a piece "about how 'weird' her body language is," seemingly in regards to the fact that the royal is often seen touching her growing belly. She questioned in her Instagram post what women can do without being nitpicked, and urged outlets to "Do better."

"When I was 8 months pregnant I touched my belly all the time because it was MY belly and it was MY baby(usually as active as in this vide) inside, had crazy emotions ranging from elation to depression to rage to uncontrollable fits of laughter. I was a swollen, hot, sweaty, enormous, flatulent, in search of my feet, hot fudge sundae junkie, nervously excited, pudgy faced, waddling goddess," McDonald shared, in a totally relatable caption.

She added, "The thought of having to go through all of that plus having a million cameras in my face, bullied left right and center, and still be gracious, elegant, gorgeous, and full of purpose in front of the whole world is unimaginable. Do better. Leave her alone."

Markle is often the subject of tabloid headlines, especially following news she and Prince Harry were expecting their first child. Speculation is rampant that she is "difficult," as reported by outlets like The Daily Beast, and is at odds with other members of the royal family. Most recently, an alleged body language expert weighed in on the rumored drama between Markle and Kate Middleton for The Express, alleging that the former Suits star had been "put in the corner" by Harry, 34, who appeared "grim-faced," during an event at which other members of the royal family took "center-stage."

In addition to speculation about the nature of her relationships with her husband and other royals, Markle is subjected to a constant barrage of rumors about her fertility, and other pregnancy and parenting-related matters. Prior to the announcement that she and Harry were to welcome a child in the coming months, outlets like the Daily Mail speculated about them trying to get pregnant, repeatedly picking at Markle's age. In the months leading up to the announcement, the former actress was body shamed, as reported by StyleCaster, and called things like a "crown digger d-list 'actress'" by Twitter users.

Following the announcement, she was slammed for cradling her bump too much, according to Yahoo. She's not the first famous person to face such criticism. Khloé Kardashian caught similar flack during her first pregnancy, according to the outlet, but she was able to fight back, tweeting that she would "touch my bump and love my bump as often I choose." Due to her position in the monarchy, Markle has had to take the critiques in stride.

The duchess revealed during an International Women's Day panel that she avoids Twitter and newspapers, according to Harper's Bazaar. This is, presumably, her attempt to avoid reading negative headlines about herself.

Sometimes, ignorance is bliss. What you don't see, can't hurt you. Mom-shamers and Internet trolls will always be out there, but it's best to ignore them. Here's hoping Markle can enjoy the remainder of her pregnancy in peace.