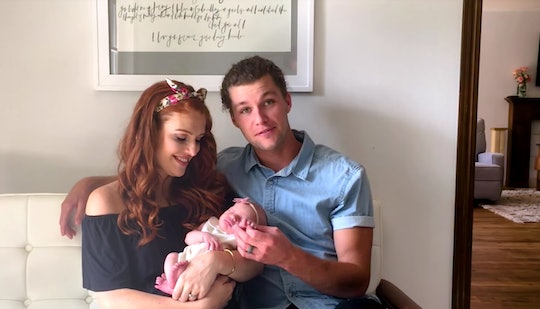 For more than 10 years, fans have watched the Roloff family go through major changes on the TLC reality show Little People, Big World. Throughout this time, fans watched as parents Matt and Amy Roloff navigated the world raising their four children — twins Jeremy and Zach, Molly, and Jacob — on their Oregon farm. Fans got to watch Jeremy and Zach graduate college, marry their wives, Audrey and Tori, respectively, and have kids. And now the family is going through more changes. On Tuesday, Audrey and Jeremy Roloff announced they're leaving Little People, Big World after 18 seasons of the show and fans are devastated.

This past season of Little People, Big World was a pretty huge one. Fans got to watch Audrey throughout her pregnancy with the couple's first child, and even got to tune in to watch as they welcomed their daughter, Ember Jean, into the world, according to Good Housekeeping. It was special not only for the whole entire Roloff family who got to rewatch this special moment, but for fans, too, who had been following along with Audrey and Jeremy's journey.

This all started 14 years ago. And about two years ago, when I — when Audrey got pregnant — it's a "we thing" — thats when I started thinking about how much longer I wanted to do this. I've been doing this for a very long time — I think I was 13 when we actually started filming. So when we had Ember, it really became apparent that it was time to make our exit and move away from Little People, Big World, and start pursuing some other projects and businesses that we've got going.

The past eight months, maybe over the last year, the lord has been really been affirming that and intentionally calling us out of the show. So we've been pressing into that and focusing on our businesses and our ministry and all of that and it's been really fun and really great... it feels like a good time, it feels right, and we're super thankful to have had the opportunity to share our lives with you guys. It's been such an awesome ride.

In an Instagram post on Tuesday, Jeremy continued, stating how thankful he was for fans who have watched him grow up on the show. "It has been an amazing run, and I can't say thank you enough to all of you who have watched and supported us along the ride," Jeremy wrote on Instagram.

Needless to say, fans of the show will be sad to see the couple go from it. "This makes me so sad!" one commenter wrote.

"Good luck with the next chapter and your beautiful daughter!" another commenter added.

But just because Jeremy and Audrey are leaving the show doesn't mean the show isn't going away completely. Little People, Big World will still be on air, according to People, and Jeremy and Audrey will continue to support their family members still on the show. This means that fans will still be able to get to watch Zach, Tori, and their super adorable son, Jackson, on screen and follow along with the rest of the Roloffs.

Although fans might be sad to no longer see Jeremy, Audrey, and their super cute family on TV, the good news is that fans will still be able to keep up with the couple on their respective social media accounts, where they post super adorable photos of their family and will continue to do so, in addition to keeping fans updated about the other projects in their lives.

Sure, Jeremy, Audrey, and Ember may no longer be appearing on TV, but fans who followed along and fell in love with their journey can keep up their next chapter (and whatever that might entail) in other forms. It might be bittersweet, but the couple isn't totally disappearing.