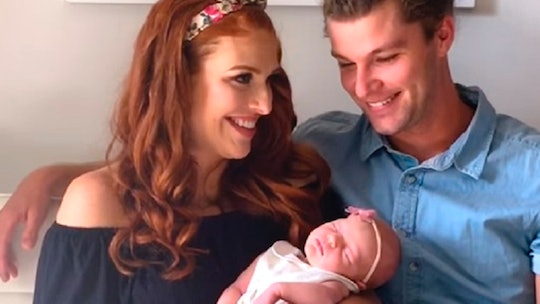 What do you do when you have kids to take care of but you're sick? After coming down with a "nasty cold", Audrey Roloff asked moms for advice about at-home remedies and their own tips for ensuring their little one doesn't get sick as well. The blogger and reality star seems to be currently dealing with the dilemma, so she took to social media seeking help from her fans. As if caring for an infant wasn't hard enough, now, you have to fight through a runny nose, coughing, and sneezing. And, all while worrying that your baby doesn't catch whatever you have and stays healthy.

Roloff is most well known as the wife of Little People, Big World star Jeremy Roloff, but she is also just a regular mom, with normal problems. Just yesterday, Roloff asked what other moms have done when they are under the weather. Digging into the topic, Roloff wrote in her Instagram post:

ATTN MOMS: What are your go to cold/flu remedies for yourself while nursing, and for your littles?! Getting sick while pregnant/nursing is the worst and I’m always on the hunt for pregnancy/nursing approved remedies. I got hit with what seems to be just a nasty cold... but I know the flu has been a tsunami wave lately so just wanting to take extra precautions.

Roloff then went on to talk about what she's tried so far in order to get well. She said she's been heavy on her vitamin D intake, using essential oils, eliminating sugar from her diet, drinking up her tea and honey, and soaking in epson salt. She also said she is seriously hydrating herself with water, taking Ningxia, and even praying. Despite all the hot broth, nose spray and trying to avoid the spread of germs, she apparently isn't getting well fast enough.

One Instagram follower responded to Roloff, writing, "My doctor did give me the okay to use throat lozenges or the their [sic] numbing spray ... And I know they say you can use one of the types of Robitussin if you need to." The follower also wrote that she heard anyone with autoimmune problems should stay away from elderberry syrup, though it can be beneficial during illnesses.

While on the elderberry topic, one of Roloff's other fans promoted the pros of elderberry syrup, saying, "Elderberry is completely safe while nursing and is a life saver. I’ve cut so many colds short while nursing my baby."

Another user advised to avoid any decongestants because they can "dry up your supply." Mamapedia has reported that decongestants are not recommended while breastfeeding. Other suggestions from some of Roloff's followers were inhaling steam, taking Zinc, and eating foods with cayenne pepper.

For moms worried about passing their illness to their baby through their breast milk, according to Breastfeeding Basics, it's OK to breastfeed while you are sick. In fact, it's actually better than holding off while ill, because your body produces antibodies that your baby will take in. Associate clinical professor of pediatrics at the Vanderbilt University Children's Hospital, Catherine Dundon, MD told Parents that most moms pass down their protective antibodies through breast milk before they actually become ill.

Audrey and Jeremy Roloff's baby Ember Jean was born on Sept. 10, 2017, according to Us Weekly. And, Mom Audrey Roloff opted for natural childbirth. When announcing Ember's entrance into the world, Jeremy Roloff told Us Weekly, "Audrey did amazing. Natural labor is no joke. I have a renewed appreciation for her strength ... I'm in awe by the circle of life."

After the new year hit, both Roloff and her husband gushed on their social media accounts that their daughter was the highlight of their 2017 and that they look forward to more great moments with Ember in the coming year. And, hopefully Roloff can enjoy it all without the tissues and runny nose.