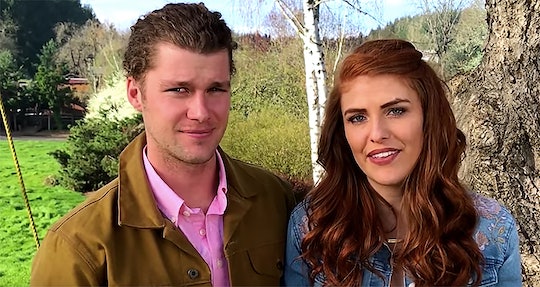 Audrey Roloff Is Back On Social Media, & Fans Are So Excited About Her Life Updates

If you know anything about Little People, Big World star Audrey Roloff, it's probably that she *loves* social media. From updating fans about her baby, Ember, to sharing marriage advice, Roloff is one of those people who seems to be glued to Instagram at all times. So, when Roloff decided to ditch the 'gram for three weeks to work on a book about marriage with her husband, Jeremy Roloff, fans were understandably upset to be out of the loop on her life. But don't fret Little People, Big World fans — Audrey Roloff is officially back on social media. That being said, here's an overview of what Roloff and her fam have been up to during their cleanse.

Seemingly out of the blue on March 5, Roloff informed fans that she and Jeremy would be MIA on social media for a few weeks. Why, you ask? Apparently, the couple wanted a period of uninterrupted time to work on their book about marriage called, Beating 50 Percent. "GETTING OFF SOCIAL MEDIA," Roloff penned, according to Instagram. "... @jeremyroloff and I will be taking a bit of a social media break. We're not exactly sure how long, but we need to unplug for a bit ... so I'm signing off for a few weeks in order to give undivided attention to writing our book and being with our baby girl."

Needless to say, Roloff and Jeremy's disappearance from the 'gram didn't sit well with many fans.

"Missing you guys something fierce," one person commented on Roloff's announcement.

And one to the point supporter said: "COME BACK ALREADY."

So, what have Jeremy and Roloff been up to these past few weeks? Check it out below.

Any parent knows that a lot can change in a few short weeks. It's sort of like magic, in a way — you close your eyes for a second and then poof, your baby is someone completely new. And as it turns out, this has been especially true for Roloff.

"After taking 3 weeks completely off social media (which was so necessary and refreshing) WE'RE BACK!" Roloff said on Tuesday, according to Instagram. "Happy Resurrection Day a few days late! While we were gone... Our baby got a little bigger, and hair got a little longer ;)."

Aww. I think it's a safe bet fans are thrilled to see baby Ember growing up.

Baby Ember Is As Cute As Ever

Speaking of Ember, girl is as adorable as ever. Following Roloff's "we're back!" post, she gifted fans with a series of photos featuring Ember in a sweet little romper and pink headband.

Making matters even more cute is that Ember learned to crawl during her parents' social media break. "The face of determination. Moments later she learned to crawl," Roloff revealed on Tuesday, according to Instagram. "She is one STRONG girl."

As for Jeremy, he's as equally as thrilled to be back on Instagram. Jeremy is so excited, in fact, that he has shared three snaps since his return —including a cute photo of the couple's date night.

"First time we’ve dressed up in a while," Jeremy admitted on Wednesday, according to Instagram. "Feels good to emerge from the writing cave and boy oh boy, I do look like a caveman. Makes me wonder how I have such a stunner beside me... "

It's not surprising that many fans have questions about Roloff and Jeremy's book. For instance, did the duo finish the project while they were away? If so, when will it be released?

Although a pub date isn't available yet, Jeremy did share that the first draft of their manuscript is complete. "Back. While we were away, we finished the 1st draft of our manuscript and Ember began to crawl," Jeremy gushed on Tuesday, according to Instagram. "Two major milestones. I can’t get enough of this girl!"

They Returned To TV

In case you forgot, Roloff and Jeremy are the stars of TLC's Little People, Big World. And interestingly enough, the duo returned to social media on Tuesday, the same day the series made its return to TV.

"Season 18 of #LPBW starts tonight!" Jeremy captioned a shot of himself and Roloff on set, according to Instagram. "It’s a special season for me. Who’s watching?!"