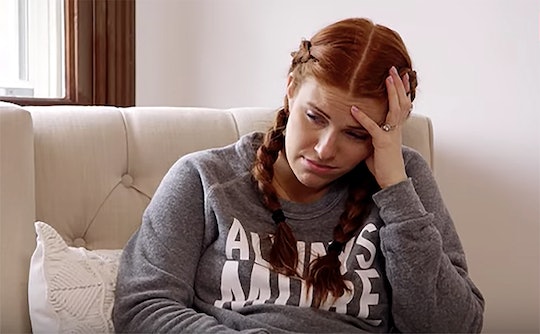 Audrey Roloff and her husband, Jeremy Roloff, welcomed their first child into the world in September 2017. Roloff and Jeremy named their little one Ember (cute, right?) and everything seemed perfect for the new family. Of course, nothing is ever as good or bad as it seems. And in the new trailer for season 13 of Little People, Big World that hit the internet on Thursday, Audrey Roloff got *real* about her daughter's health issue. In a twist that might surprise some fans, motherhood hasn't been entirely hunky-dorky for Roloff.

If you take a gander at Roloff's Instagram page, you'll probably see why it's easy for people to assume that she has a perfect life. From the gorgeous shots of Roloff posing with Ember and Jeremy to her carefully picked outfits, her life appears awesome on the surface. But what fans don't know is that Roloff deeply struggled with Ember's health issue in the first months of motherhood.

As it turns out, Ember was born with a lip and tongue tie that made it difficult for her to gain weight. "It's just really hard watching her being in pain," Roloff said about Ember's medical issue, according to the trailer.

Making matters worse is that Ember's issue made breastfeeding nearly impossible for Roloff. The good news, however, is that Ember is now doing fine — something Roloff touched on in an Instagram post from February. "We took this chunky girl to her 6 month check up today," Roloff captioned a snap of Ember at the doctor's office, according to Instagram. "With all the issues I endured in those first few months, we were told that we’d never be able to exclusively breastfed. Yet here we are hitting the 90th percentiles on pure mama milk!"

But even though Ember is OK now (what a relief) Roloff admitted that the experience brought her a lot of disappointment. "I definitely felt robbed of those sweet newborn moments," admitted in the trailer. Yep, Roloff went there.

Of course, I'm sure there will be people out there who will critique Roloff for expressing disappointment — especially since Ember is a healthy baby. I bet some people will even call her ungrateful and selfish. But is Roloff really deserving of this criticism? Heck no.

Most parents, new or not, have certain expectations of how parenthood will go. Whether it's about the type of activities their kid will participate in or particular ideas about breastfeeding — it's just a part of life to have expectations. And for Roloff, her expectation was that she would be able to enjoy motherhood without any hiccups. It's a safe bet many parents can relate to that hope.

Either way, it's really refreshing to see Roloff speak from such a vulnerable place. It goes without saying that vulnerability in reality stars should be celebrated because their candor could end up helping somebody else out. It's a win-win, really.

This isn't the first time Roloff has opened up about the unexpected pains of motherhood, however. Shortly after giving birth to Ember, Roloff penned a candid post about her first few weeks postpartum.

While I am overflowing with love for my daughter and husband, I won't sugar coat it... these past two weeks have been HARD. The first 24 hours with Ember were bliss, but after that it was as if I went back into labor again... I was well prepared for the pain and suffering that comes with childbirth, but I was not prepared for the pain and suffering that comes afterwards. I got all the things... the common "TMI" postpartum hurts, along with severe engorgement, too much milk, not enough milk, blisters, bruises, clogged ducts, and mastitis. I can't believe I'm saying this, but the pain that I've experienced while breast feeding has been comparable to unmedicated labor contractions.

Sounds about right. Life as a new parent is no joke.

First-time parent struggles aside, it's great to see Roloff once again using her platform to remind fellow parents out there that their feelings are valid.